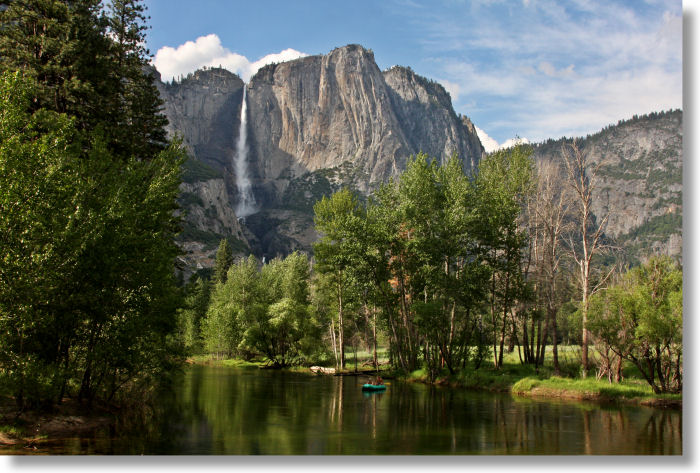 All the stuff sliding past in this slideshow, for starters. You can skip down to the text if you're more a facts & figures kind of researcher. Actually, you should watch the entire slideshow anyway (it lasts about three minutes), because I ate a roast beef sandwich while I was making it and it would be disrespectful to the cow to just walk out in the middle.

Also, All This Stuff:

Yosemite Valley is a veritable scenic jackpot packed into the compact space between the valley's sheer granite walls. It features El Capitan, Half Dome, Clouds Rest, and a variety of other peaks; the matchless tunnel view; some of the world's best known waterfalls; a series of shut-off-the-cell-phone meadows; and the Merced River wandering about through the valley's length.

Yosemite Falls, at 2,425 feet (728 meters), is North America's tallest. Bridalveil Fall, one of the iconic features of the tunnel view, is among the world's most photographed waterfalls. Nevada and Vernal Falls make the Mist Trail Yosemite's signature hike. Yosemite Valley also features spectacular seasonal falls like Ribbon Fall and the Cascades, and there are lots of lesser-known but still impressive falls like Wapama in the north and Chilnualna in the south.

El Capitan and Half Dome are two of the world's best known promontories, yet they're dwarfed by many of Yosemite's other peaks. Yosemite is home to 20 mountains that exceed 10,000 feet (3,000 meters) in elevation.

These majestic trees are the world's largest living things, and the Mariposa Grove's Grizzly Giant, at 2,700 years, is the world's oldest sequoia, with branches that are bigger than the trunks of most other species of tree. Yosemite's sequoia groves also feature trees you can walk through, trees with telescope-style hollow trunks, and scores more that are just plain stupendously big.

Yosemite is dotted with beautiful alpine lakes made even more striking by granite peaks rising precipitously from their banks. Tenaya Lake, born to grace postcards, is the most famous, but there are dozens of others. You could easily fill an entire Yosemite vacation with nothing but lake excursions.

Nothing promotes peace of mind like a meadow, and Yosemite's full of them. Tuolumne and Dana are the prizes of the Tioga Road; Wawona is one of the centerpieces of southern Yosemite; the Glacier Point Road is dotted with small meadows; and Yosemite Valley is lousy with meadows.

Yosemite hosts hundreds of varieties of wildflower, and due to its range of elevations, wildflower season lasts for months. Meadows and creek banks are the most likely spots to find them in profusion, but they can be seen all over the place.

Yosemite is famed for its bears, who visit the Yosemite Valley campgrounds nightly and will tear apart any car unfortunate enough to be harboring an ice chest overnight. They're not alone, though: Yosemite is also home to deer, coyotes, mountain lions, bobcats, marmots, and a variety of birds and small mammals and reptiles.


Want to see more? Try the Yosemite Sampler Photo Gallery or the Yosemite Day Hikes With Little Thumbnails For Each Hike page.