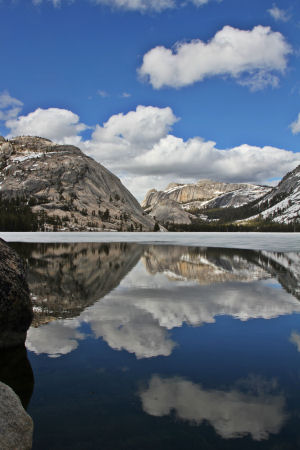 Why visit Tenaya Lake?  If your sweetheart refuses to consider any vacation that doesn't involve lying on a beach baking his or her brains out, promise them a day on the sand at the east end of Tenaya Lake, where they can destress with a cadre of fellow sun worshipers on most summer days.

Meanwhile, you can head to the west end of the lake, where the view back across the lake to the granite promontories that surround it is about as sure a postcard shot as you'll ever find.

Best Time to Visit:  Whenever the Tioga Road is open - June through October, most years

Crowd Factor:  Medium. Tenaya Lake is arguably as gorgeous as anything in Yosemite, but it's a long ways from Yosemite Valley, so it's not as crowded as other water attractions like Yosemite or Bridalveil Falls. Don't expect to have the place to yourself, though.

Scenery Factor:  Tenaya Lake may be the most beautiful of all Yosemite's lakes. It's a mile (1.6 km) long and bordered on three sides by granite peaks and domes. The only drawback is that Tioga Road passes along the lake's northern edge, but this is easily overlooked.

Difficulty:  Easy. Very little elevation gain (lakes are notoriously level). Fording the lake's outlet along the western shore may be challenging in the spring and early summer, though.

TLDH Route:  The full hike is worthwhile, but it has a few inconveniences, including wading across both the inlet & outlet and walking along the side of Tioga Road as you traverse the lake's north shore. If you want the best of Tenaya Lake's views with just a few minutes of effort, park near the western edge of the lake and then walk south along the shore there until you reach the lake's outlet, or thereabouts. You'll get the spectacular views to the mountains across the lake, featured in both the cover photo just above and in this photo, without all that pesky exercise.

Parking:  Small lots at either end of the lake, plus wide shoulders along Tioga Road that are suitable for parking.

Nearest Bathrooms:  Pit toilets near Tioga Road on either end of the lake. There are bathrooms with plumbing at the Tuolumne Meadows Visitor Center, 9 miles (14 km) east.

Nearest Snacks:  At the eastern edge of the Tuolumne Meadows, 9 miles (14 km) east

Of Tree Stumps in Yosemite and Medieval Vineyards in England:  A handful of tree stumps poke up from Tenaya Lake, a sight of mild interest that tends to get overlooked amidst the surrounding grandeur. But their history is more compelling than you're likely to have guessed: these lodgepole pine remnants, it turns out, range from 600 - 1,000 years old, and their ages overlap generally with the Medieval Warm Period, a time of rising temperatures across the Atlantic that led to settlers in Greenland, vineyards in Britain, and increased food supply that enabled a doubling of Europe's population. Times, in short, were good.

In the southwestern US, though, the Medieval Warm Period was a time of severe drought - two of them, most likely, lasting more than a hundred years apiece. The Four Corners area appears to have been abandoned by humans during this time, and among other indicators in the Sierra Nevada, lodgepole pines were growing where what is now 25 - 60 feet of Tenaya Lake but was then apparently dry ground. It's hard to predict whether or not current climate warming will lead to more megadroughts in California, but it can certainly be disconcerting to look at those stumps and imagine the sort of conditions that would lead to them being on bare earth again.

To learn more about Tenaya Lake's tree stumps, see Geology Underfoot in Yosemite National Park by Greg Stock and Allen Glazner, which devotes a chapter to the topic.

Hazards:  The lake's outlet, at the west end of the lake, has no bridge. In late summer you can usually skip across on exposed rocks, but early in the season, it can be deep enough to make a man realize just how cold the water is.

It's not unusual to find mosquitoes here - the west and south banks of the lake seem particularly prone to this nuisance.