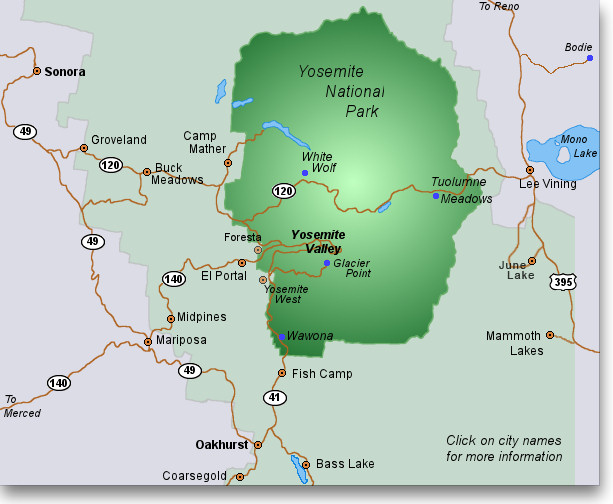 Plan ahead: this is the mantra to follow if you want to sleep inside Yosemite in the summertime. The lodging here possesses an interesting range and variety, from the opulence of the Ahwahnee Hotel to the heat- and bath-free tent cabins in various parts of the park, but almost all of it gets reserved in advance during the peak season. Things are much better in the winter; you can often walk up to the front desk, ring the little bell, and get a room immediately at any of the hotels in the park, although it's safer to get reservations in advance no matter what the season.

If Yosemite is full or you're looking for a more modestly priced motel, there are lots of small towns on the fringes of the park, all lovingly described in the links below, that exist to cater to Yosemite visitors, and they'll be very happy to see you. Some of them are attractions in their own right. Again, if you're visiting in the summer, reservations are a good idea. Four million visitors per annum fill up a lot of hotel rooms.

The Ahwahnee Hotel is Yosemite's Biltmore, Ritz, and Negresco all in one: it's the kick-ass luxury hotel in Yosemite. Although time spent indoors in Yosemite is generally time wasted, it's worth a short detour to check out the Ahwahnee, especially its dining room, with 34-foot (10-meter) beamed ceilings, and the Great Lounge, with its stained glass windows, immense fireplace, and abundance of overstuffed chairs.

The grounds are pleasant, as well - young brides conduct martial-arts tournaments to decide who'll get the highly prized reservations to hold their weddings on the Ahwahnee's lawn. The Ahwahnee has 99 hotel rooms and 24 cottages, with rates starting at around $500 per night.

Yosemite Lodge at the Falls is a step down from the Ahwahnee in luxury, but also in price. It's directly across the road from the Lower Yosemite Falls trailhead. It's a traditional lodge/hotel with 249 rooms starting at around $270 per night.

Curry Village has a large and varied mix of housing, with tent cabins (427 of them, without electricity or baths, each housing up to five people), cabins with and without baths (sleeping from two to four people), and traditional hotel rooms. Curry Village is located in the southeast end of Yosemite Valley. Rates start at around $140 for unheated tent cabins and go up to the $250 range for cabins and hotel rooms with private baths.

The romantically named Housekeeping Camp consists of 266 Frankensteinian cabin/tent contraptions, each containing one canvas and three concrete walls. They have electricity and beds for up to four people, but no bedding or private baths. The Housekeeping Camp is located just southeast of Yosemite Village. Cabins are typically a bit over $100 per night.

The venerable Wawona Hotel, built in the 1870's, has 104 rooms. 50 have private baths, and 54 have shared baths; most of the rooms open onto public verandas (they're not called walkways if they're wide enough to accomodate adirondack chairs). The hotel stands across the road from the Wawona Meadow golf course. There's a dining room in the main building and a tennis court nearby. Rooms start at around $150 per night, $200 if you want a private bathroom.

The Redwoods in Yosemite is a collection of privately owned vacation houses available for short-term rentals through a central agency. They're all in the Wawona area, near the Merced River, Wawona Meadow, and the Wawona Hotel. Since the homes are all privately owned, size, decor, and renter happiness will vary. Yosemite West, just south of the Glacier Point Road's western endpoint, is another enclave of private homes with vacation rentals available.

The White Wolf Lodge, near Lukens Lake, has four traditional cabins with private baths and 24 tent cabins that share baths. The wooden cabins have electricity, propane heat, and maid service. The tent cabins lack these amenities but do have wood stoves; they cost around $140/night. All cabins sleep up to four people. There's also a small restaurant here.

Pleasant as it is to stumble out your door and see Half Dome first thing in the morning, there's just not enough lodging for everyone who wants to stay in Yosemite, and unless you're organized enough to make reservations well ahead for a summer visit, there's a good chance you'll be shut out, in which case you'll need to stay somewhere outside the park.

However, being outside Yosemite doesn't necessarily mean you'll be relegated to someplace so remote that you'll be, say, bumping into cast members from Lost or sharing a hammock with Gilligan and the Skipper. El Portal is closer to Yosemite Valley than any of the inside-Yosemite lodging options that aren't already in the valley, and Fish Camp is closer to the Mariposa Grove of Giant Sequoias than any lodging options anywhere in Yosemite - or the entire world, for that matter. The same goes for Camp Mather and the Hetch Hetchy area.

The communities surrounding Yosemite aren't without their perks, either. Bass Lake, Sonora, Mammoth Lakes, and Lee Vining (next to Mono Lake) are all worthwhile places to visit for reasons of their own. And resorts such as the Tenaya Lodge in Fish Camp and the Evergreen Lodge in Camp Mather sponsor a variety of extracurricular activities, from ice skating and rock climbing to massages.