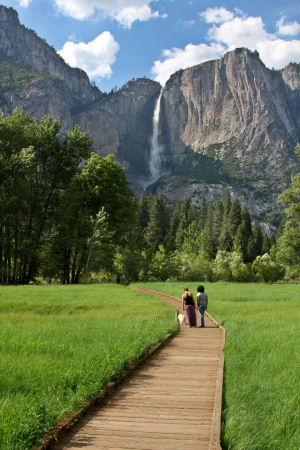 Why Hike this Trail?  It's a flat, easy hike that takes you around and through a pair of meadows and includes multiple views of Yosemite Falls and Half Dome. This is a great intro-to-Yosemite hike, especially if you've just escaped from a city and need to destress.

Best Time to Visit:  In the spring and early summer, when the meadows are green, the wildflowers are blooming, and Yosemite Falls is roaring. Figure roughly late April to mid June, possibly a bit longer or shorter depending on how much snow pack there was the previous winter.

Hiking Time:  1 - 2 hours, depending on how much you linger over the scenery

Scenery Factor:  High. Besides the meadows you'll be walking through, you'll see Yosemite Falls from a variety of backgrounds, with bonus views of Half Dome scattered throughout the trail. Once you finish, pop over to the Yosemite Village Store and find the postcards & prints section, then see how many of the viewpoints of Yosemite Falls you've just walked past.

Crowd Factor:  High, unless the weather is awful or a meteor has recently struck the planet. You'll never be too far from either a road or people on this hike. However, because the scenery level is high throughout the hike (barring the northwest corner between the Swinging Bridge and the Lower Yosemite Falls trailhead), there's room to spread out and the crowds likely won't be piling up at any one spot, except at the Swinging Bridge and, around sunset, on Sentinel Bridge.

Difficulty:  2 out of 10, and it only rates a 2 because it's longer than a mile. It's essentially flat, and in fact it might be possible to take a wheelchair the entire route.

Nearest Bathrooms:  They're all over this trail. There are well-used pit toilets at the Swinging Bridge parking lot that you could probably find with your eyes closed (luckily, the bridge itself is out of range); bathrooms with plumbing at the Yosemite Lodge, which you'll pass on the northwest corner of the hike; and more bathrooms with plumbing at the Lower Yosemite Falls trailhead, which you'll also reach on this hike's northwest passage.

Nearest Snacks:  The northwest section of the trail takes you past the netherlands of the Yosemite Lodge, and while this may be the hike's low point scenerywise, it's the high point snacks & bathroom-wise. There's a convenience mart, a couple restaurants, and even a bar at the lodge.

Getting There:  The trail's in Yosemite Valley, so follow the crowds and you'll end up in the neighborhood. Once you're in the valley, follow Southside Drive east (the only direction you can go on that road) until you see the sign for the Swinging Bridge. From here, anyplace you can find a parking spot will serve (if you haven't found one yet by the time you reach the stop sign at the intersection with Sentinel Bridge, turn left and cross the bridge). See the trail map for more information.

Hazards:  Want to know what it's like being a buffet? If so, venture out into the meadows in the spring without mosquito repellent, and your dreams might come true. Wonder what your nose would look like without any skin? Then wander the trail without paying attention to the bicyclists who share the path.

Which meadow is which?  For the most part, it's Cook's Meadow north of the Merced River and Sentinel Meadow south of it. Check out the satellite view for a better look.

Trail Bonus:  This hike takes you directly past the Lower Yosemite Falls trailhead. The trailhead has impressive views of its own, but if you haven't taken the lower falls trail before, take it now. In fact, since it's only half a mile round trip, you might as well do it regardless.

Trail Trivia:  Cook's Meadow is named for John J. Cook, who owned a hotel in Yosemite Valley from 1881-87 and grazed cattle in the meadow. Domestic animals didn't get kicked out of the meadow for good until the late 1920's. Park stewardship was apparently a much more casual affair during Yosemite's early days as a national park, as evidenced not only by Cook's Meadow, but by the golf course in Wawona Meadow and the dam at Hetch Hetchy.

Sentinel Meadow is named for its proximity to Sentinel Rock, which was said by the members of the Whitney Survey (1863) to resemble a giant watchtower.

Below the Swinging Bridge 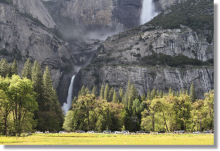