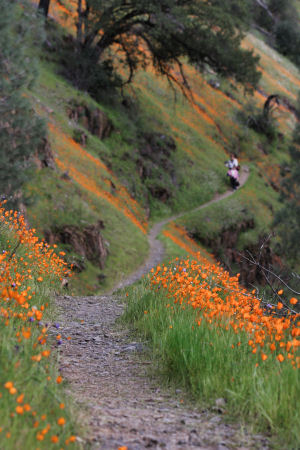 Why hike the Hite Cove Trail?  It's one of the area's great wildflower-spotting hikes, and one of the earliest starters - you can see dozens of flower varieties here while Yosemite's high meadows are still under several feet of snow.

You'll also get to see the union of the south and central forks of the Merced River, which meet at the trailhead and then journey together, by and large amiably, to the Pacific. Like ravens and black widows, rivers mate for life.

Crowd Factor:  It can be popular during the wildflower display, but since there's no particularly magnetic destination, the other hikers will be spread out throughout the canyon and the trail won't feel crowded.

Scenery Factor:  The Hite Cove trail is all about the wildflowers, which grow in profusion throughout the first two miles of the trail. Hite Cove itself is an abandoned mining settlement some 4.5 miles (7.2 km) down the trail.

The Hite Cove trail rolls through the narrow canyon of the south fork of the Merced River. It starts well above the canyon floor, but descends to the river after roughly a mile and a half (2.5 km). At these sub-2,000-foot elevations, the ground cover runs to oak, brush, and Digger pines, rather than the stately conifers common throughout Yosemite.

Given that Hite Cove is a pick-your-own-distance hike with no specific turnaround point, how far should you plan to go? If you can't bear to see more than a few thousand wildflowers in a single expedition - and your reasons, whatever they are, don't need to be explained to me - then you can pack it in after half a mile if you're there while the poppies and lupines are in show. If variety of species is your bag, stick it out for a mile or so, and you should be rewarded with sightings of colorful flowers like Blazing Star (depending on timing, of course, as is always the case with wildflowers; the Blazing Stars typically don't bloom until after the poppies have begun to wane). If you want to sit by the river, you'll have to hike about a mile and a half before the trail dips all the way down the hillside to the banks of the Merced. A few hundred meters farther along, a couple rock shelves poke out from the shore and serve as admirable places to rummage through your snack inventory and gird yourself for the return trip. If you just want to see a Redbud, you can check that one off on your way up the hill from the highway, before you even reach the official trailhead (in fact, you can see a small one blooming on this street view of the trailhead area). And Red Maids (which are closer to magenta than red) may be blooming along the highway where you park, so the flower hunting can begin as soon as you open your car door.

Difficulty:  Moderate. There's not much total elevation gain, but there are lots of rolling ups and downs along the trail. The first hundred meters or so, including the climb from the highway to the trailhead, is arguably the hardest stretch.

Best Time to Visit:  March through mid-May, depending on how severe the winter's been. By the end of May, the grass and flowers are dying and it's getting much too hot anyway. Tufted Poppies, which are among the showiest of the high-volume species here, usually peak in March.

Nearest Bathrooms & Snacks:  At the Cedar Lodge, 3 miles (4.8 km) east of the trailhead. There's also a pair of portable toilets across the road from the trailhead (street view here, in case you're particularly interested in them. While you're giving them the once-over, you might also want to ponder why Google felt compelled to obscure the identity of the oak tree just down the road).

Driving Directions:  The Hite Cove trailhead is on highway 140, 8.5 miles (13.5 km) west of Yosemite's El Portal border (10.5 miles west of the ticket gate, which is a couple miles inside the park) and 21 miles (33 km) east of Mariposa. It's at the site of the historic Savage's Trading Post (trailhead street view here).

The trailhead is just east of the Ferguson Landslide, which closed the road for months in the spring of 2006. There's now a one-lane detour that crosses the river to bypass the slide (detour street view here; street view showing the slide area from the detour here). The slide is a work in progress and, particularly after storms, tends to wake up and roll over a few times before going back into snooze mode, so rather than wait for it to finish its business, CalTrans plans to build a sort of carport over the road that will induce rocks to roll into the river instead of the road; you can see an artist's rendering of the finished project here.

The stoplight to access the detour has a cycle of something over five minutes, so you can save time by interpreting the traffic laws liberally if you see the light turning yellow as you arrive. You'll only run into the detour, by the way, if you drive to Hite Cove from Mariposa; if you're arriving from Yosemite Valley, you'll miss it altogether and reading these last two paragraphs was, unfortunately, a complete waste of time.

Parking:  Along highway 140 across the road from the trailhead.

Hazards:  The first mile and a half (2.4 km) of the trail winds along the hillside about a hundred feet above the river. For the most part, slipping off the trail would lead to some memorable and instructive bruises, but nothing worse. There are spots, however, where the dropoff is sheer enough that a fall could kill you. Be careful when stepping aside to let other hikers pass (it's a single-track trail) and save the wine until after the hike.

You'll find lots of poison oak here, a few mosquitoes, and the occasional tick. Later in the year (when you shouldn't be here anyway, due to fire danger) you may encounter rattlesnakes.

Poppies bloom in the Merced River Canyon, which you drive through en route to the Hite Cove trailhead, every spring, but the river-of-cheetos profusion in these photos is a rarity. If you hear reports of a superbloom here, this is the sort of thing you're in for.