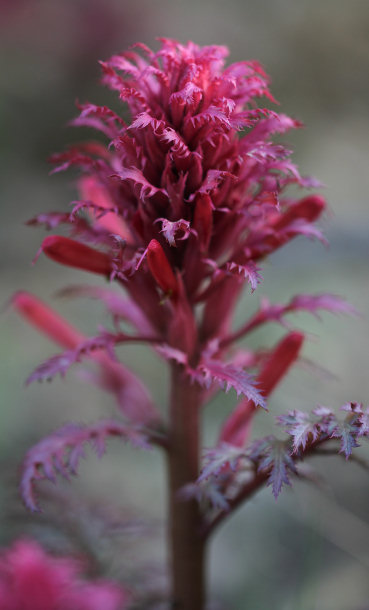 The park is home to around a hundred species of wildflowers (see a guide at the park's website), with the northwest section of the hiking loop being generally the most productive flower-hunting grounds and late March through April the peak time. You won't see a single species take over a vast expanse of land and make you wonder if the uprising is finally at hand, as occasionally happens with the Tufted Poppies in the Merced River Canyon, but popcorn flowers can dominate areas of an acre or two and flowers like Sky Lupine sproing up in large colonies as well.

The park hosts several interesting foothill species that you won't find in Yosemite and that could make a stop here worthwhile for flower enthusiasts. Indian Warrior, shown above, is among the most photogenic; there's a colony of it along the old road in the northwest section of the park that usually blooms sometime from late February into March. It's a semi-parasitic plant that requires a host to thrive, so please don't pick some with the hopes of transplanting it to your garden - picking flowers isn't allowed in the park, and would be particularly damaging for species like this one that only grow in a single location in the park.

Broad-Lobed Phacelia, a small and not immediately eye-catching wildflower, grows all over the place in the local area, including several sites in the park, but is actually endemic to just a three-county area in California. A few small purple/maroon monkeyflowers, Congdon's Monkeyflower, Bolander's Monkeyflower, and Purple Mouse Ears, require careful attention and maybe some luck to spot, but are quite striking when viewed up close, while another larger Mimulus, Yellow Monkeyflower, is more widespread. Valley Tassels, which resemble a sort of albino Purple Owl's Clover, grow in a few colonies in the northwest section of the park. California Plantain blooms by the thousands here in gravelly areas along the edges of the trail but is rarely noticed because the plants are only an inch or two tall and the flowers themselves only a few millimeters in diameter. And, to be honest, because the flowers aren't particularly prepossessing even viewed up close, though you're welcome to click on the thumbnail below and judge for yourself. They do look like little white-winged bats from certain angles, which is obviously a point in their favor.

There's lots of overlap with species that grow in Hite Cove, including Blue Dicks, Twining Brodiaea, Foothill Sunburst, Bird's Eye Gilia, and several others. As well, some of the park's later blooming species also probably bloom in Hite Cove but can't be seen there because the latter trail closes in late spring due to fire danger. Mariposa Lily (Calochortus venustus) and Harvest Brodiaea (Brodiaea elegans) are likely candidates.