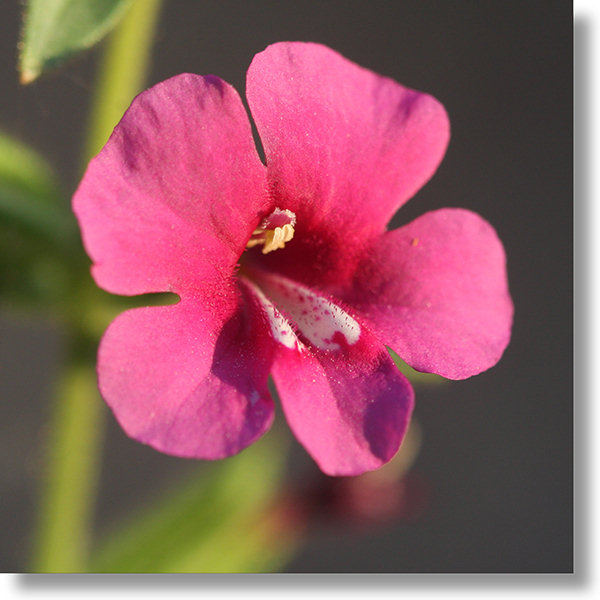 Mimulus bolanderi has small flowers, no bigger around than a nickel, and is consequently much overlooked. Its name doesn't come up in conversations about the prettiest wildflowers (regrettable, perhaps), and it rarely gets gathered into wildflower bouquets (not regrettable at all, according to the plant). It's only when viewed at a much enlarged size, such as the photo above, that it really gets to shine. So thanks for visiting this page and giving it a chance. It's clear that your generous nature and rare aesthetic sensibilities are too good to be wasted on the rest of the internet, and you should reward yourself by spending several more hours browsing this website.

Bolander's Monkeyflower is more widespread in the foothills than in Yosemite, but you can often find it blooming in June along Highway 41 near the Wawona Meadow trail, and I've also seen it near the road on the ascent from Yosemite Valley to Crane Flat (the Tioga Road's western terminus).

Mimulus bolanderi etymology:  Mimulus is a Latin term meaning "masked mime" or "little mime," applied to the Monkeyflower because many species in the genus have flowers resembling faces (in the case of Mimulus bolanderi, a face sticking its tongue out). The Latin term itself derives from the Greek word for "mime," which is nearly identical to the Greek word for "ape," and widespread misunderstanding of which word was the root led to "Monkeyflower" becoming the common name for the genus. The Prairie Works blog explains this in far more detail in a charming essay worthy of Avram Davidson, though they don't get into how depressing it is that even ancient Greece needed a word for "mime." 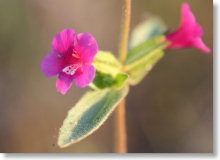