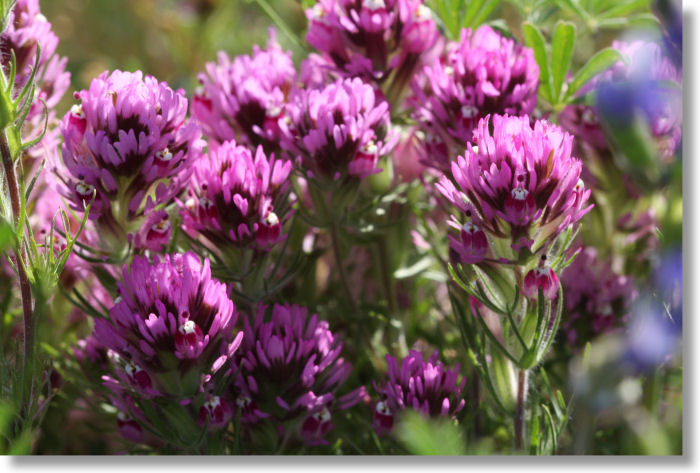 Purple Owl's Clover, so called because of its pink color, is common in the foothills but much rarer in Yosemite itself. You can find large stands of it most years near the beginning of the Hite Cove trail.

Purple Owl's Clover has a close cousin, Castilleja densiflora. If you're in the presence of one or the other, you can impress any passing botanists, and possibly learn their secret handshake, by explaining that Castilleja exserta has hairy, reddish stems, while Castilleja densiflora has smooth, yellowish ones.

Castilleja exserta etymology:  This phrase combines Spanish and Latin words to mean, it appears, "extended castle." Which probably seems puzzling, but it turns out that the castle reference is actually homage to Spanish botanist Domingo Castillejo (1744-1793, possibly, though the English and Spanish Wikipedia entries disagree on his birth and death dates).

This Photo:  Along the Hite Cove trail, late April. All the best people are busy these days downloading various larger sizes to use as their desktop wallpaper.