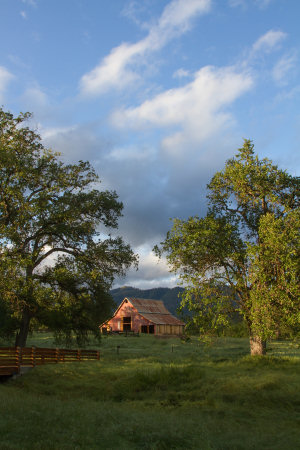 Distance:  2.7 miles (4.3 km) round trip for the full loop, with various shortcuts available

Why visit the Ahwahnee Hills Park?  It's some warm-up scenery to stretch your legs on before you hit the hard stuff in Yosemite, and a rare 400-acre island of publicly accessible hiking terrain in the Sierra foothills. It's largely grass and Black & Valley Oaks, but with a bit of brushy hill in the northwest and a 15-acre pond in the northeast. Wildflowers are plentiful here (though not as dense as at Hite Cove) in late March and April, with the greatest variety of species along the north half of the hiking loop.

Best Time to Visit:  There should be a window of a few weeks from mid April to early May, possibly shifting by a week or so from year to year, in which the grass is still green, the weather is mild, wildflowers are abundant, and the deciduous oaks have leafed out. This is the sweet spot. The area's generally less scenic in the winter, and high summer gets unpleasantly hot at this elevation. Though the oaks typically don't leaf out until April, the grass turns green and the wildflowers begin blooming in significant numbers during March, as a rule, so March and early April are good second choices. The park's photogenic Indian Warrior colony blooms somewhere from mid February to early March; see the wildflowers page for more details on the park's most notable species.

Crowd Factor:  Low. It's seldom particularly crowded, and hikers will be well spread out along the trail. Since the park runs parallel to Highway 49, though, traffic noise will be audible along much of the trail, and a nearby fire station's PA system carries into the south end of the park when it's active.

Difficulty:  Easy. There's some brief climbing along the trail's northwest quadrant, but it's mostly flat overall. Acrophobes can have a worry-free hike here.

Nearest Bathrooms:  Bathrooms with plumbing at the main parking area, and pit toilets along the northern (near the pond) and southern ends of the loop trail

Parking:  The lot at the main entrance holds 20 or so cars, and the dirt lot adjacent to the south gate holds several more. Parking is unlikely to be a problem.

Dog Friendly:  With the caveats that dogs must be kept leashed and you're requested to clean up their poo, your dogs are welcome in the park.

The Park's Provenance:  The park is on county-owned land that served as a tuberculosis sanatorium from 1918 - 1969, then spent 15 years as a school for wayward boys. Locals began the lobbying and planning processes for turning the area into a park in the 1990s, and the park eventually opened in 2014. You can read more about the park's history, including a stretch it spent as a tavern and stopover on the stage route to Yosemite in the late 19th and early 20th centuries, at the park's website.

Trail Notes & Hazards:  Ticks, rattlesnakes, and poison oak are the primary hazards here. You're unlikely to encounter ticks or poison oak unless you leave the trail (though you should check yourself for the former anyway, especially in the spring), but rattlesnakes periodically like to sun themselves along the trail in the summer, so keep a weather eye out. Mountain lions are occasionally seen in the park, but usually not at times of day when hikers are active, and there haven't been any alarming encounters to date. Black bears also wander through the park from time to time; they're generally not a threat unless you encounter a mother who thinks you lack honorable intentions toward her cubs.

The park host sometimes closes the gates up to half an hour before closing to keep people from entering the park when it's about to close. If you return from your hike to find yourself locked in, inquire at the host's trailer, located near the main parking lot, and he'll let you out. The pedestrian gate at the south end of the park never closes, so you can park there if you don't want to deal with this.

Full Disclosure:  In case you're curious about design similarities between the park's website and this one, they arise because I manage the park's website, on account of having neighbors on the park's board who talked me into it. The board doesn't pay me for this - they don't have money to pay me with, in any case - so I like to think that I haven't been bribed into saying nice things and will bring the same level of objectivity, which admittedly isn't high, to this hike as to the others on the site. I am a fan of the park, though, and happy that Madera County was willing to let this land be preserved instead of parceling it out to developers, so take that into account.