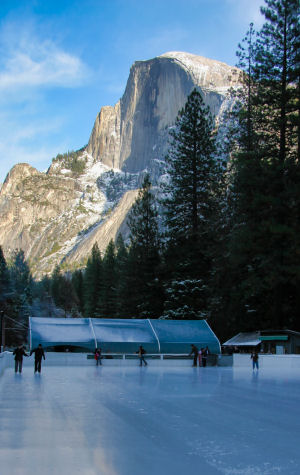 Your hiking and driving options are limited in Yosemite in the wintertime, but the crowds are much smaller. The low winter light and snowy vistas are photographer-friendly, there are lots of winter activities to keep you happy, and lodging is much easier to find. For various reasons - but especially that one about the crowds - Yosemite can be more fun in winter than summer.

The Tioga Road, which reaches 10,000 feet (3,000 meters) in elevation, is closed altogether in the winter, and the Glacier Point Road, with an average elevation of around 7,000 feet (2,100 meters), is closed to automobiles fives miles in (at Badger Pass, Yosemite's alpine ski area) and transformed into a cross-country skiing and snowshoeing trail. Yosemite Valley, though, at an altitude of 4,000 feet (1,220 meters), is open year round and fairly temperate by High Sierra standards. It gets enough snow to spawn the occasional Calvinesque snowman, but not so much that you would practically use showshoes or skis (or not often and not for long, at any rate).

The Sierra snow gods typically don't get really busy until January; chances are about 50-50 that you'll have enough precipitation for snow activities in December, and it's not unheard of for you to have to postpone your snow jones until late January.

Most of the non-camping options in Yosemite Valley and southern Yosemite are open year round - even the unheated tent cabins in Curry Village. Accommodations inside Yosemite usually require reservations months or even years ahead for summertime stays, but can often handle walkup traffic in the winter. It's best to get reservations anyway, though, since they can fill up in advance for winter events - the Ahwahnee, Yosemite Valley's celebrated luxury hotel, often fills up for the Vintners Holidays and the Yosemite Chefs Holiday Series, for instance. (See the Yosemite Lodging section for more details on finding a place to stay in Yosemite.)

Hotels in the towns surrounding Yosemite are open year round, too, and it's much easier to find reservations and bargain rates in the winter. Mariposa, Midpines, and El Portal are especially fit locations for winter lodging, since they're on Highway 140, the lowest (and usually least icy) winter route into the park. Avoid Lee Vining and other towns on the eastern slope in the winter - Tioga Road, the eastern entrance to Yosemite, is closed from November through May, give or take a week or two.

Most of Yosemite's campgrounds close for the winter, but four remain open year round for hardy travelers, all on a first-come, first-serve basis (even the ones that require reservations during the summer). In Yosemite Valley, Upper Pines Campground and Camp 4 are available. Camp 4, a famed hangout for climbers, is tents only (no RVs allowed). The other two are the Wawona Campground, near the Wawona Hotel in southern Yosemite, and Hodgdon Meadow Campground, near the Big Oak Flat entrance (Yosemite's northwest entrance) on Highway 120. You can also camp in the wilderness in the winter; as in the summer, a wilderness permit is required - see the park service's winter wilderness page for more details. Additionally, cross country skiers can stay at the Glacier Point Ski Hut (starting at $120) and the Ostrander Ski Hut ($15 - $55), a cabin at Ostrander Lake. Reservations are required for both the Glacier Point and Ostrander Ski Huts, and you'll have to win a lottery to get reservations for the Ostrander Hut.

Most of the trails in Yosemite Valley that don't lead up the valley walls are open year round. Bridalveil Fall, Lower Yosemite Falls, Mirror Lake, and the Vernal-Fall-footbridge section of the Mist Trail are all hikable, except after unusually heavy snowfalls. Artist Point, too, is accessible nearly all the time, and the valley loop trail, which winds from one end of the valley to the other, is always open.

Trails going from the valley floor to the rim are harder to predict. The Snow Creek trail stays open year round. The bottom half of the Upper Yosemite Falls trail also stays open, but a gate just past Oh My Gosh Point, near where the trail rounds the corner to a view of the middle cascades, can be closed during wintry conditions, and even when it's open, there's a good chance of snow on the upper half of the trail. The 4-Mile Trail usually stays closed for the winter. Though the Mist Trail closes past the footbridge, you can divert there to the John Muir trail and get access to the tops of Vernal and Nevada Falls via the Muir Trail's more roundabout route. Sometimes the very end of the trail that leads to Nevada Fall will be closed due to ice, though, and the Muir Trail can have difficult snowy stretches even when it's open. The Pohono Trail from the Tunnel View up to Stanford and Crocker Points on the valley rim doesn't usually close, but snowy conditions can make the going difficult.

The trailheads for two of Yosemite's sequoia groves (Merced and Tuolumne) are reachable by car year round, but they're at much higher altitude than Yosemite Valley, and you may need snowshoes, depending on how wet of a winter it's been. The road to the Mariposa Grove closes for the winter, which means that you'll have a two-mile hike to get to the trailhead, and you'll likely need snowshoes in the grove itself.

In southern Yosemite, the Wawona Meadow loop and Wawona Swinging Bridge trails are accessible year round. The Chilnualna Falls trail generally doesn't close, either, but could have snow on it.

If you want to try one of the hikes that's prone to snow or potential closures, check on conditions ahead of time. The NPS website's current conditions page will list any trail closures, and you can often get up to date information on the conditions of particular trails from the public information office (209-372-0200, dial 3 then 5; open 9 to 5 Pacific time, closed for lunch). The quality and depth of information you get there seems to depend on how recently the people manning the phones have been canvassing their fellow rangers about their winter wanderings, but I've often gotten highly specific and useful information there. The Yosemite webcams can also give you an idea of how much snow is lying about the place and whether or not there's enough water flowing over Yosemite Falls to tempt you to try the trail.

Lying on the ice after a wipeout doesn't seem so bad when the view from your back is straight up at Half Dome - at any other rink, you'd need at least a fifth of schnapps to be on such good terms with the world. The rink at Curry Village (near the southeast end of Yosemite Valley), which is dominated by its views of Half Dome and the valley walls, is open from 3:30 - 6 p.m. and from 7 - 9:30 p.m. daily, and is also open 8:30 - 11 a.m. and from 12 - 2:30 p.m. on weekends and holidays. Skating costs $9.75 ($9.00 if you're 12 or younger) and skate rentals are $4. Dress warm - the rink lies near the southern edge of the valley, which gets little direct sunlight and is noticeably cooler in the winter than the valley's north side.

All the giant sequoia groves - Mariposa, Merced, and Tuolumne - are good places to snowshoe. You can drive to the trailheads for the Merced and Tuolumne groves. The road to the Mariposa trailhead is closed in the winter, which means you'll have an extra two-mile hike to get there.

In the winter, the park service closes Glacier Point Road to autos at Badger Pass and turns the remaining 10 miles into a cross-country skiing and snowshoeing track. You can just snowshoe along the road or, if you're ambitious, cut off the road and try a longer hike, such as Dewey Point, which is something over four miles one way. Note that the park service regularly sends a grooming machine out to carve nordic ski grooves in the road, and the skiers, who are faster than you are and carry long pointy sticks, will get annoyed if you muck up the grooves by treading on them. So keep the snowshoes away from the ski grooves when you're on the road.

Snowshoeing is free anywhere inside Yosemite; if you lack snowshoes, you can rent them from the cross country school at Badger Pass.

People can also be spotted on occasion cross-country skiing in Wawona Meadow and the meadows of Yosemite Valley, although both of these locations lie at elevations of only 4,000 feet (1,200 meters) or so and will only be skiable intermittently.

There's no fee for cross-country skiing in Yosemite; if you need skis, you can rent them from the Badger Pass cross country school, which also offers lessons.

Badger Pass, five miles up Glacier Point Road, is Yosemite's alpine destination. It's a smallish hill made up of blue and green runs, but lift tickets are inexpensive and the ski school is well regarded. Check out the Badger Pass webcam to see what you're missing.

If you want more challenging runs in the Yosemite area, try China Peak, roughly 80 miles (130 km) from Yosemite's southern entrance. Get a map first - the route there from Yosemite, winding through Bass Lake, North Fork, and Auberry, is tricky to find your first time.

Mammoth Mountain is even closer to Yosemite, but due to winter road closures, it's more than twice as far a drive as China Peak; Kirkwood, which is farther in absolute distance, is a much shorter drive (and in fact you'll pass it on your way if you're taking the shortest available winter route to Mammoth). Yosemite is also within roughly 200 miles (320 km) of the abundance of ski resorts in the Lake Tahoe area, including notable hills like Squaw Valley and Heavenly.

The snow-play area at Fish Camp, about a mile outside Yosemite's southern entrance, has a free sledding/tubing hill. There's also a tubing area at Badger Pass and another snow-play area near Crane Flat (the Big Oak Flat Road/Tioga Road junction). Keep in mind that there's an impressive fee for using the Badger Pass tubing area.

The Tenaya Lodge, located two miles outside the southern entrance in Fish Camp, conducts horse-drawn sleigh rides into the surrounding forest (and back again, generally), when there's sufficient snow. The rides last around 45 minutes and include breaks for hot cider and chocolate. Sleigh rides cost $30 for adults and $20 for children. The schedules vary from day to day; call the Tenaya (888-514-2167, option 3) for more information.

This is a favorite activity for Yosemite visitors who don't have snow tires or 4-wheel drive. You're required to carry chains (in your car, anyway) everywhere in Yosemite in the winter. Depending on road conditions, the chain requirements will be at one of these levels:

R0: Chains must be carried, but they don't need to be on your tires

Call 209-372-0200 and enter 1 at the first two prompts to hear a report on current road conditions inside Yosemite. For conditions outside the park, call 800-427-7623 or visit the CalTrans website.

If you have tire-chain phobia, enter and exit the park via Highway 140 (the road that goes through Merced and Mariposa). It's the lowest, elevation-wise, of the park's entrances, meandering up the Merced River canyon directly into Yosemite Valley, and the least likely to have chain requirements. The roads in Yosemite Valley often have icy spots, due to the shadows cast by the high valley walls, but chain requirements are relatively rare there. Chain requirements are far more common on the Highway 41 and 120 entrances to the park, which reach elevations above 6,000 feet (1,800 meters). For more information, see the Yosemite Road Conditions page.

Gates of the Valley (Valley View)

Half Dome in Storm