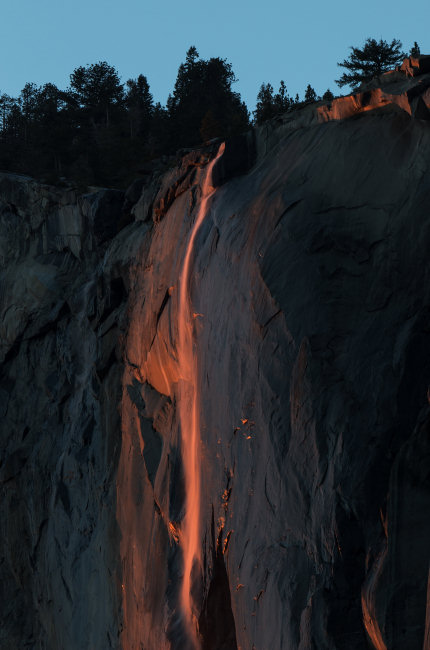 Suppose you'd like to be noticed every once in a while - who wouldn't? - but it never happens because you have a small watershed and you're surrounded by bigger, grander, and more spectacular competition. Basically, you're trying to meet girls at the bar after the Chippendales bus broke down outside because it had a minor collision with the van taking the leading-man nominees to the Oscars. What do you do?

If you're Horsetail Fall, you turn into a river of lava. Unconventional, perhaps, but it works, even though the "river of lava" bit is actually just an optical illusion caused by the way the light hits the fall at sunset for a few nights in February, when Horsetail becomes the park's center of attention. Bridalveil Fall is likely the park's most photographed waterfall, given its prominent visibility from the Tunnel View, but it's because of Horsetail Fall that park officials close off a lane each of Northside and Southside Drives for parking in February. Yosemite Falls is nearly half a mile tall, but it's Horsetail that has photographers setting up their gear in the morning and camping out so they'll have the spot they want that evening. The waterfalls of the Mist Trail have the most volume, but it's photos of Horsetail that inspire the most awed disbelief in first-time viewers.

Is It Really So Amazing?  It can be. The Horsetail firefall is visible to the naked eye, but it's a small waterfall and it's a long ways off - three thousand feet above you on the eastern shoulder of El Capitan - so unless it's a wet year and there's mist blowing off the fall to inflate it, you might not be adequately impressed unless you've brought binoculars or a telephoto lens. A few other factors have to go right for the firefall to appear at all: there has to be water flowing, which doesn't happen every year, and there has to be a large enough window of clear sky on the western horizon at sunset for sunlight to strike the fall. At its best, though, it's spectacular. The above photo is a relatively uninspiring example - try a Google image search to see many better shots.

Seeing the Firefall:  As firefall season approaches, you can see whether or not there's water flowing over the fall via the El Capitan webcam on the Yosemite Webcams page, and you should be able to find various online status reports reviewing the quality and timing of this year's edition. Mariposa-based photographer Michael Frye usually provides Horsetail-conditions updates, along with enviable photos, on his blog (here's a typical example from 2016), and has concluded that the peak is usually somewhere from February 16 - 23. Though photographers will start staking out spots in the morning during firefall season - all those pesky trees in the valley tend to obscure the view of the fall - you can often find a spot at the back of the crowd somewhere if you're a late arrival. You won't be communing alone with the wilderness during firefall season, but at least photographers waiting for the firefall tend to be a genial bunch.

The Other Firefall:  Best practices in conservation have evolved over the years, and the park's caretakers have thought better of some that fairly boggle the mind in retrospect, such as carving tunnels through Giant Sequoias, luring bears into trash dumps so tourists could watch them forage, and creating a literal firefall off Glacier Point. In the latter case, park employees at Glacier Point would build a fire each summer evening and then push the embers over the cliff for the amusement of onlookers in the valley below. The Glacier Point firefall ended in 1968, but you can see footage of it from roughly 3:50 - 4:40 in the video below.