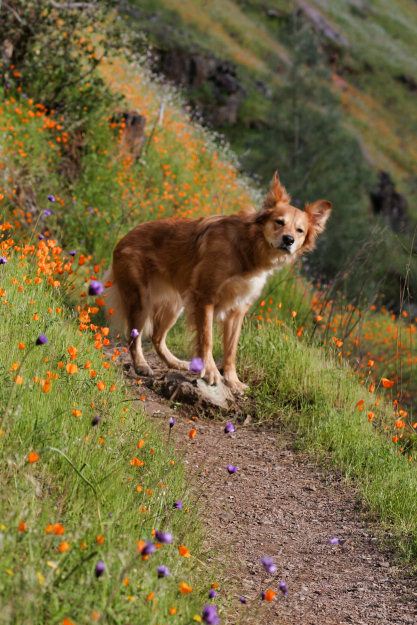 Canis familiaris isn't native to the Hite Cove area, but if you're careful and observant - or, possibly, if you bring one yourself - you might be lucky enough to spot one here. This pup had appointed himself as official greeter while his hiking companions were busy taking pictures just out of frame.

If you're thinking of bringing a dog to Hite Cove, keep in mind that the forest service has some requirements for keeping pets under control on Sierra NF trails, and keeping them leashed is a particularly good idea here so you can steer them clear of the poison oak that grows along the way - handling a dog that's been shouldering through poison oak is an experience you're likely to regret. And handling a post-poison-oak dog and then relieving yourself before you've had the chance to wash your hands, as happened to a friend once, is something you particularly want to avoid. It's just best all around that your pets and poison oak never meet.

Be forewarned, as well, that this is a narrow trail in a steepish canyon with sections where you'll need to squeeze up against the hillside if you encounter hikers coming the other way, so dogs that haven't quite gotten the hang of behaving well in close contact with strangers should probably be left at home.

The orange and purple flowers that the pup is posing with are Tufted Poppies and Blue Dicks, respectively. The backslash of white flowers towards the rear of the photo is probably composed of either Popcorn Flower or Mustang Clover.