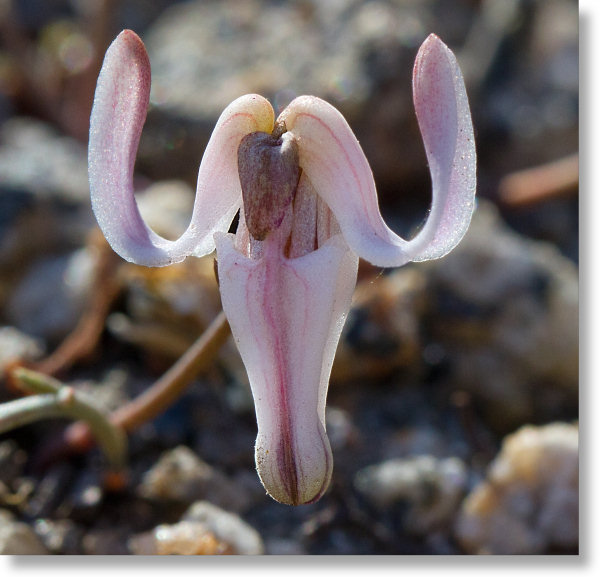 Bears and waterfalls are wonderful to behold, but there may be no sight in Yosemite more worthy of celebration than the Steer's Head flower. Besides being the most anthropomoophic of any plant you will ever find, it's simultaneously both surprisingly common and maddeningly hard to find - the neutrino of wildflowers, if you will, though much less money has been spent in search of it. A variety of causes contribute to its elusiveness, including small flowers that grow on leafless stems only an inch or so above the ground; a short, verily brigadoonian blooming period that occurs right after snowmelt; and understated flower coloring that blends in well with the rocky soils from which it grows. The flowers also seem to be on a sort of tape delay, waiting several seconds after you start looking at them before they actually become visible to you.

Tom Lambert of Yosemite Explorer, who found the bloom pictured here and was kind enough to tip me off about it, suggests that the best way to find Steer's Head flowers is not to look for them. Or, more precisely, to look for the leaves instead. While the leaves are also small, they have a distinct appearance and stand out much more readily than the flowers do against the bits of ground up granite from which they grow. Finding the leaves doesn't guarantee that the bloom will be underway, but it's the most promising sign available. Once you're in the vicinity, you may need to crouch or sit for a while before you spot any flowers; they're hard to pick out from standard eye level. The flowers and leaves grow on separate stems, which adds just that extra touch of difficulty to keep you from getting bored.

The good news offsetting the challenges presented by Dicentra uniflora is that once you've found your first flower, you're likely to eventually spot many more in the immediate vicinity - like their namesakes, Steer's Heads tend to herd together. In fact (rather less like their namesakes), you'll probably be standing on one, which you should remedy right away. The gradual discovery of more Steer's Heads nearby is an experience something akin to your eyes slowly adjusting to a darkened room and allowing you to notice detail, though it could just be a matter of the flowers deciding you're harmless and allowing you to see them. I don't think this has yet been studied.

Dicentra uniflora has a few close relatives in the Yosemite area. Pacific Bleeding Hearts (Dicentra formosa) are much easier to spot and are also easy to distinguish from Steer's Heads. They grow in fairly large groups along the Lewis Creek and Carlon Falls trails. Few-Flowered Bleeding Heart (Dicentra pauciflora) looks something like a cross between Steer's Head and Pacific Bleeding Hearts, with the outer petals curling out from near the bottom of the flower (i.e. the end farthest from the stem) rather than (as with Steer's head) the top. Botanists describe this as a difference in recurvage, with Dicentra pauciflora petals having recurvage of less than half their length (meaning the petals stretch almost to the bottom of the flower before curling around) and Dicentra uniflora petals having recurvage of more than half their length (meaning they begin curving right out of the gate, leading to the classic steer-horns look). Dicentra pauciflora is extremely rare in Yosemite and I've yet to see it, but here are a few photos from other people.

Habitat:  Rocky soils, particularly in the park's mid elevations, though it can be found at higher elevations as well. Stephen Botti reports it to be common around the granite domes that overlook Yosemite Valley, and I've encountered it near Sentinel Dome myself. It blooms right after snowmelt, and whenever I've seen it (which is, admittedly, not often) there've been either patches or large amounts of snow nearby.

Dicentra uniflora etymology:  Dicentra is a Greek term meaning "double spurred", referring here to the two outer petals that curl around to form the figurative horns of the steer's head. Uniflora, meaning single flowered, is an accurate term, though flora invisibilis would have served just as well.

This Photo:  Along the Dewey Ridge Trail (one of the winter routes to Dewey Point; the trailhead lies between Summit Meadow and Badger Pass), early May 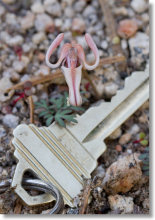