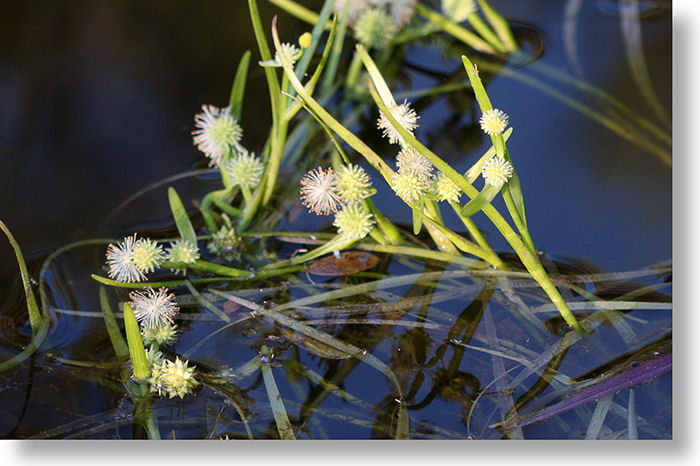 Western Azalea and Calfornia Poppy may draw the big crowds and win honorifics like California State Flower, but can they snorkel? Not for any amount of money. Enter Narrow-Leaved Bur-Reed, Yosemite's little mermaid. It's one of the very few flowering plants in Yosemite that you can spot popping straight out of a stream or lake. Not only that, but the flowers look like children's jacks after a formative excursion to Chernobyl and the leaves are long enough to strangle an elephant. Nothing but Sparganium angustifolium has the credentials to qualify as the favorite Yosemite wildflower of both Jacques Cousteau and P.T. Barnum.

Narrow-Leaved Bur-Reed grows at elevations ranging from Yosemite Valley to Tuolumne Meadows, but the key, as discerning readers and lookers-at-of-pictures have already determined, is to look for it only in the wettest of places - streams, lake edges, ponds, and marshes.

Sparganium angustifolium etymology:  Sparganium derives from the Greek word sparganon, which means "swaddling band," a direct if peculiar reference to the plant's long, narrow leaves. Angustifolium is from the Latin words angustus, meaning narrow, and folium, meaning leaf. It would appear that Narrow-Leaved Bur-Reed is a narrow-leaved plant with narrow leaves. 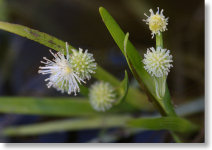