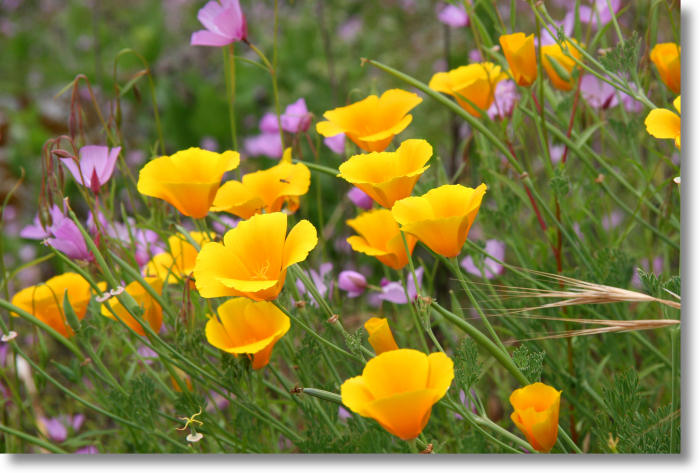 Size:  typically around a foot tall, with blooms a couple inches across

The Dark Side:  California Poppies are notorious prima donnas, refusing to open their flowers unless the sun is out. They do this to torment photographers trying to capture them in the soft light of an overcast day or a sunset.

Eschscholzia californica etymology:  Eschscholzia is named for German physician and naturalist Johann Friedrich Eschscholtz (1793 - 1831), who discovered the poppy genus in the San Francisco area in 1816. Californica, as you have probably already surmised, is a reference to the state; California itself is named for a mythical island, populated entirely by beautiful pagan Amazon warriors, from a 16th-century Spanish novel. The aforesaid warriors commanded trained griffins, used weapons of gold (the only metal found on the island), and sailed off with their queen Calafia to battle Christians in Constantinople. Calafia, and probably California as well, were likely derived from caliph, though the author is no longer available to confirm this. 1 2 3 4

This Photo:  Near Highway 49 between Ahwahnee and Oakhurst, early June; elevation 2,300 feet (700 meters). The pink flowers in the background are Farewell to Spring. 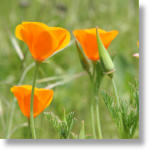