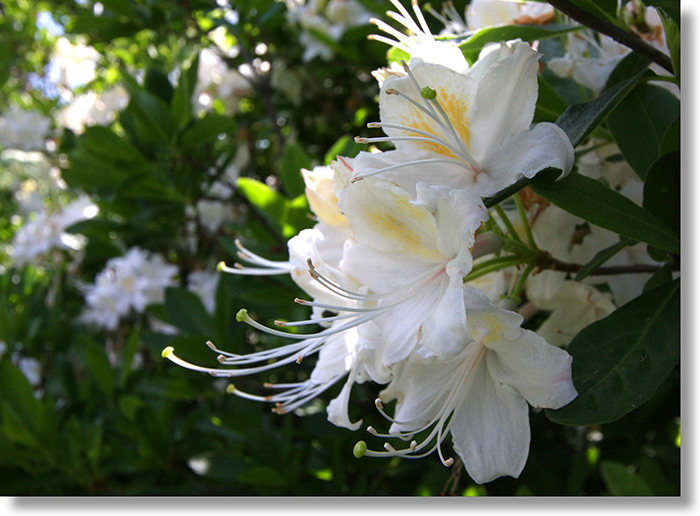 Western Azalea is a flowering shrub that produces some of Yosemite's most spectacular and aromatic wildflower displays. The flowers are large (up to four inches across) and plentiful, blooming in bunches in exuberant shows that seem almost out of place in a high-country locale like Yosemite; they look like they should be getting woven into leis, not sharing territory with bobcats and bears.

Western Azalea flowers have a strong, sweet scent that few people can resist. You can tout your popcorn machines, Cinnabon stores, and ovens full of baking bread, and not without reason; but for naked, unadulterated nose nirvana, there's nothing quite like being downwind of a blooming stand of Western Azalea.

The northeast end of Cook's Meadow is one of the most famous places to find Western Azalea, but it grows in lots of other locations as well. I've seen it along the Wawona Meadow trail and nearby at the park's southern entrance; in the Merced Grove of Giant Sequoias; along the Dewey Point trail; outside the park along Highway 140 approaching the Arch Rock entrance (or departing it, if you'd rather), on the Lewis Creek trail, and in Nelder Grove; and in sundry other spots scattered across Yosemite Valley.

Rhododendron occidentale Etymology:  The more or less literal translation from the original Greek and Latin, respectively, would be "rose tree of the western sky". More evidence that botany is the most poetic of all the sciences.