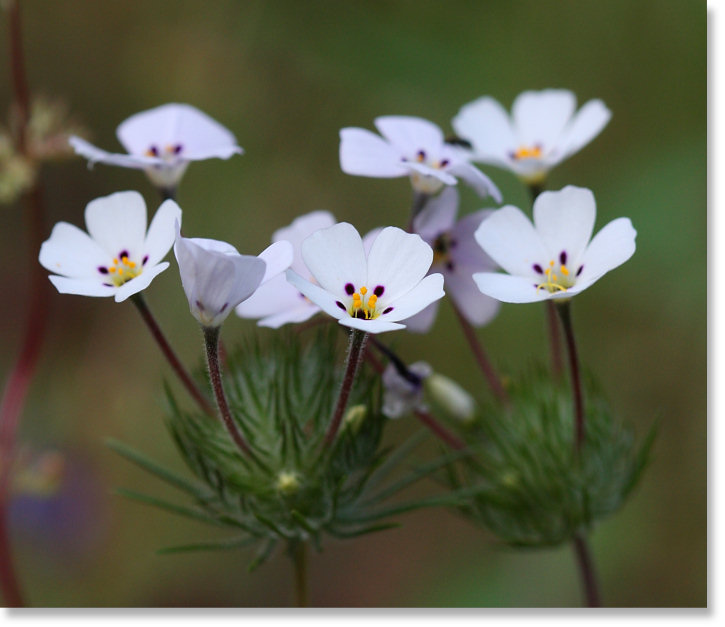 Mustang Clover is a foothill and montane flower that extends to elevations above 4,000 feet in Yosemite and the surrounding forest, turning up reliably every year along the Hite Cove and Lewis Creek trails. The latter harbors a Mustang Clover mother lode, a clearing roughly a quarter mile upstream from the bridge where a thousand or so plants spring up simultaneously in an area about the size of your kitchen (see, here's a photo). Indian Pink will often be blooming at the same time on the other side the trail.

Mustang Clover flowers exhibit a pleasing amount of variety, with colors ranging from white to pale lavender to a darker pinkish hue. The Mustang Clovers in the Hite Cove area tend to have a single purple spot at the base of each petal (see the photo above), while the ones along Lewis Creek typically have purple bands going all the way around the base of the corolla instead - though the "Flower Cluster" photo below, taken along the Lewis Creek trail, includes a mix of bands and very faint spots on a single plant. One thing that's usually not variable is the hairy cluster of spiky leaves from which the flower stems sprout (photo below), similar to the arrangement on Whisker Brush, another recent evacuee from the Linanthus genus. These are reliably green.

Look for Mustang Clover in sunny, dry places - forest clearings, roadsides, and modestly wooded hillsides - in the Sierra from the foothills up to 4,000 - 5,000 feet. Actually, you can look for it wherever you enjoy looking for things, such as dresser drawers or Maui, and best of luck to you; this is merely where you're going to find it. Mustang Clover is endemic to California and lives for the most part in the Sierra in a latitude range from Reno to Bakersfield. The plants range from 4 inches to 2 feet high, and the flowers, while smallish (around half an inch in diameter), are nonetheless among the larger flowers in the Leptosiphon genus and grow in showy clusters that should catch your eye if you're moderately attentive.

Leptosiphon montanus etymology: Leptosiphon is Greek and translates to "narrow tube", referring to the corolla (the collected petals of the flower) on some members of the genus. Montanus derives from the Latin word for mountain and when appended to a plant's scientific name means "of the mountains". [1] 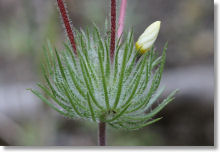