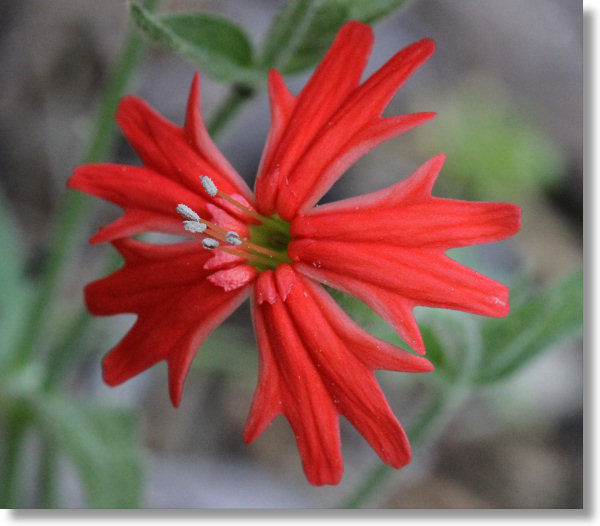 This flower is named not for its color, which is decidedly unpink, but because it appears to have been through the laundry with a pair of pinking shears. This is the explanation I've commonly heard, at any rate, and it seems as good as any. On the other hand, Wikipedia asserts that pinking shears were named after the flower. To further complicate matters, Wikipedia claims elsewhere that the word pink itself derives from the "Pink" family of flowers (formal name Dianthus), which are indeed pink but of which California Indian Pink is not a member.

Habitat:  Indian Pink is a foothill flower ranging up to about 4,000 feet (1,200 meters) elevation. You can find it in many places in the foothills surrounding the park, including along the Lewis Creek trail, and inside Yosemite along the Wawona Meadow trail, which is close to the upper end of its elevation range. It favors areas with at least partial shade.

Size: The flowers are a couple inches in diameter, and usually a foot or less off the ground. They tend to grow in eye-catching clusters of a dozen or more flowers.

Silene laciniata ssp. californica etymology:  Silene is named for Silenus, a companion of Bacchus in Greek mythology. Laciniata derives from lacinia, the Latin term for a fringe or flap on a garment, and means "divided into narrow or slender lobes" in botanical use. Californica, as you have likely surmised, refers to the state. [1] [2] [3]

This Photo:  Along the Lewis Creek trail, late May 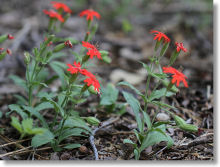