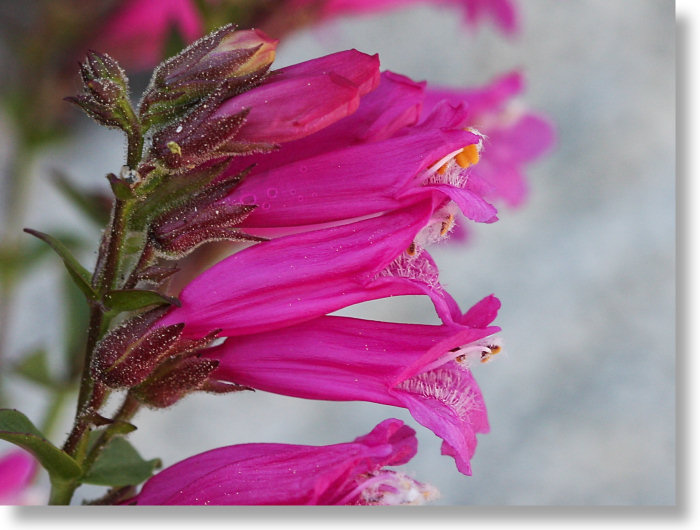 Aliases:  Pride of the Mountains

In the first episode of Yosemite Nature Notes, a park botanist waxes poetic over Yosemite's wildflowers and then throws in, "The landscape's nice, too, but it's just habitat as far as I'm concerned."

This is probably a novel point of view. Not many people, we can assume, visit Yosemite just for flowers. You can find plenty of those in the nursery section at Home Depot. It's El Capitan and Half Dome and the Tunnel View that bring the tourists in, not Platanthera yosemitensis. Right?

And yet: when you drive along Tioga Road and see, just off the shoulder, a neon-bright colony of Mountain Pride sproinging out of a crack in a great gray sheet of granite and accessorized by a bit of paintbrush, you can start to appreciate the botanical outlook on the world. Maybe, after all, that granite dome is just here to frame the Penstemon newberryi, given what a marvelous job it does at it and how much its aesthetic prospects would suffer for the lack of it. It's just a big rock, after all, hanging out in the same spot year round, never going anywhere or having interesting adventures, while flowers are showing up in unexpected places all the time and using hummingbirds to have sex. And unlike some other Yosemite attractions, flowers aren't inclined to run away or devour you when you try to pose with them for photos.

It is, undeniably, nectar for thought. Let yourself deliberate along these lines, and soon it will be occurring to you that Yosemite Falls might be just a way to attract visitors to the Western Azalea in Cook's Meadow, and Mt. Dana is just there to provide an elevation where Sky Pilot can grow, and Yosemite itself is just a handy place to stash Snow Plant and Lady's Slipper Orchid for safekeeping. Why not? The universe is full of rocky planets with mountains and canyons, but ours is the only one with Pussypaws.

Anyway: the point, which I'm hoping to think up before the end of the sentence, is this: Mountain Pride can get me, a person with the imagination of a whelk and no access to drugs, to think like a botanist - the only sort of person in the world known to be able to translate the Jepson Manual into human. So just think what it could do for you! Ergo, if you're fortunate enough to see some while you're in Yosemite, don't pass by without stopping for a closer look.

Where to find it:  Dry, rocky places; granite outcrops and crevices where it looks impossible for flowers to grow. You're most likely to see it along the Tioga Road, but I've also found it in the neighborhood of the McGurk Meadow trail and it's reported to grow at elevations down to 4,000 feet or so.

This Photo:  Along the Tioga Road, mid June 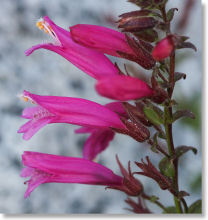 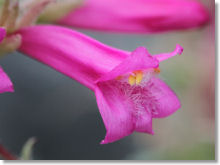