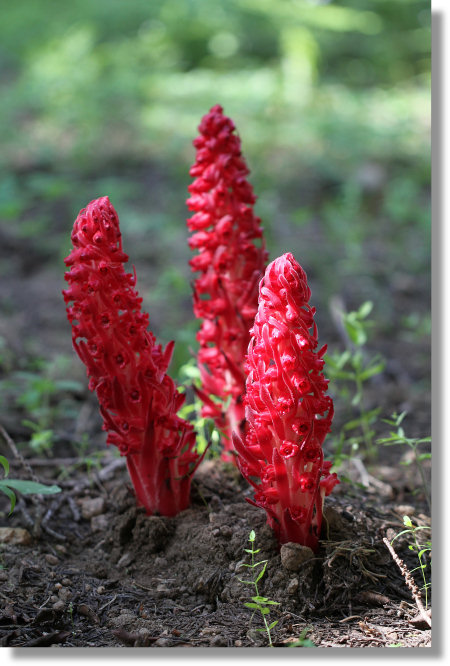 Snow Plant is the free-thinking radical of wildflower society, eschewing photosynthesis altogether in favor of a symbiotic relationship with underground fungi. As a result, the entire aboveground section of the plant is free to be a traffic-stopping bright red. Snow Plant's mushroom-from-Mars good looks, accented by its ability to grow in dark, shady spots where other flowers dare not tread, make it one of Yosemite's most arresting sights. It's the only flower to rate its own episode in the esteemed Yosemite Nature Notes video series (see below).

Size: The tube-shaped flowers are less than an inch in diameter. The plant ranges from 6 - 12 inches tall.

Sarcodes sanguinea etymology:  Sarcodes derives from the Greek word sarkodes, which means "resembling flesh". Sanguinea is a Latin term meaning "blood-red". There might be a theme at work here. The term Snow Plant seems more mysterious - perhaps, you may be thinking, it arises because the plant is the color of snow over which a bear has just vivisected an unwary tourist - but it actually derives from Snow Plant's tendency to emerge early in the spring, just after (and occasionally during) snowmelt.

This Photo:  Along the Pohono Trail, mid July