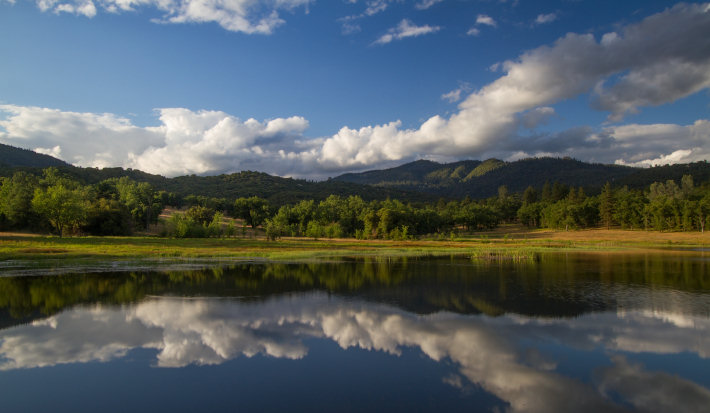 The Pond at Ahwahnee Hills Park

The park includes a 15-acre pond in its northern end, a man-made body that was built sometime in the first half of the park's 1918 - 1969 tenure as a tuberculosis sanatorium. It dried up altogether during the drought year of 2015 but usually has water year round. When it's full, a variety of waterfowl treat it as their own, with groups of Ring-necked Ducks, American Coots, and Mallards, among others, lounging through the days here at various times of the year. Lone Great Blue Herons turn up occasionally to stalk the shallows on the northern end, and Violet-green Sparrows swoop over the pond in the evenings to catch bugs. The swooping looks fun, the bug-eating perhaps less so.

Birding at the Ahwahnee Hills Park - for the subject does seem to have changed from ponds to birds, somehow - is not the equal of area hotspots like the Merced Wildlife Refuge, but is an amiable alternative to urban sites, where I'm told the birds are all heavy smokers and would cut you as soon as look at you. There's the aforementioned pond, of course, where various waterfowl always seem to manage, in an admirably nonchalant fashion, to arrange themselves at the far end of the water from your binoculars, and where Red-winged Blackbirds & Western Bluebirds like to amuse themselves among the marshes and reeds opposite the pond from the trail. You will rarely be able to complete a loop round the park without either seeing or hearing ravens and Acorn Woodpeckers - the latter spend the day here, apparently, after retiring from their pre-dawn hammerings upon the wood siding outside my bedroom. Various other well-known birds are common in season: robins, scrub jays, and Dark-eyed Juncos, to name a few, and you're highly likely to see at least one hawk on a circuit of the park. The park's website has a guide to the bird species that have been seen in the park to date, plus an expanded list of area species that have not yet been witnessed here, but, it is speculated, will someday chance upon the place and find it to their liking.