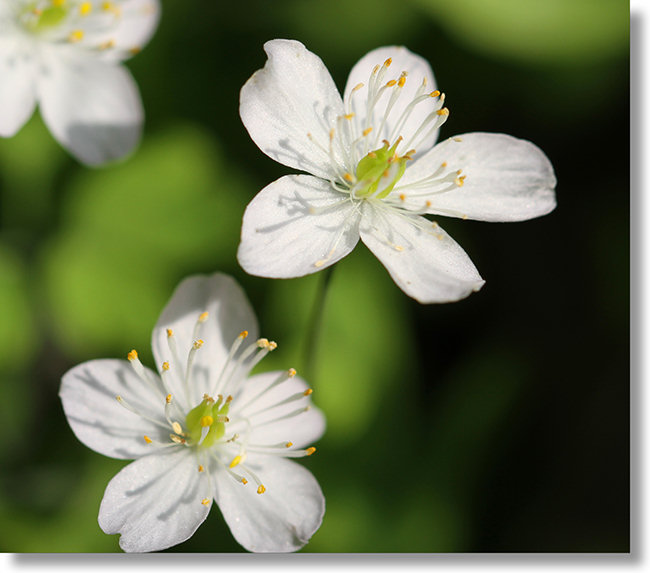 Western Rue Anemone is an early bloomer, abandoning wintry caution and experiencing the most glorious moments of life while all around are still in hibernation - kind of like a five-year-old on Christmas morning, but quieter and less chaotic. It fits in well along the Hite Cove trail, where it can greet the spring with other plants, like Fiddleneck and Popcorn Flower, nearly as inclined to disregard societal norms about when happy hour should start.

Isopyrum occidentale also flaunts convention by refusing to grow any petals at all. What look like petals are actually sepals, the athletic cups of the plant world, modified leaves that protect the more delicate parts of the flower during the budding stage. You might be able to win a round of drinks from your friends by betting they can't count the number of petals in the above photo. Depends on how much you value your friends, I suppose.

Western Rue Anemone favors shady areas in the foothills. It grows along the Hite Cove trail and elsewhere in the Merced River Canyon. You're unlikely to find it in Yosemite proper. The flowers are smallish, typically less than an inch in diameter, and the plants likely won't exceed a foot in height.

Isopyrum occidentale etymology:  Isopyrum is the ancient Greek name for the plant's grain-like fruit. (In ancient Greek, isos means "equal" and pyros means "wheat.") Occidentale is a Latin word meaning "western." Western is a somewhat arbitrary designation when you live on a sphere that's simultaneously spinning on its axis, orbiting a star, and hurtling through a universe that has no absolute up or down or even in fact an agreed upon number of dimensions, but in botanical circles, it usually means west of Europe, and is consequently used to label variations of European flowers growing in the Americas, or, much more rarely, in the Atlantic Ocean.

This Photo:  Along the Hite Cove Trail, early March