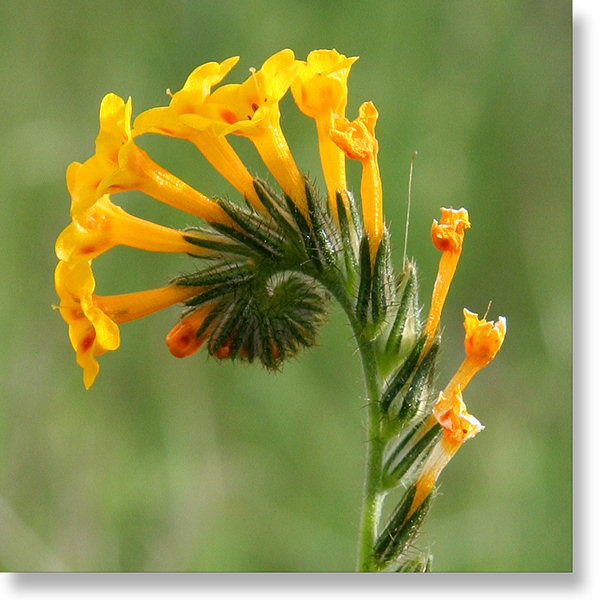 Naming wildflowers can be a hit or miss affair - Goat's Beard is a perpetual head scratcher, for instance, and we're lucky that Dichelostemma capitatum doesn't know what we call it, or it would be actively plotting to wipe out humanity. (And you don't want that, given the way plants excel at underground movements.)

Fiddleneck, however, hits the spot. Some keen-minded botanist had a good night's sleep and a robust breakfast before settling down to name this flower, and the result cannot be gainsaid. The resemblance between the flower and the thing for which it is named is unmistakable. You will never see a Fiddleneck blooming in the wild and say to yourself, "I never can remember, is that a nemophilia or a saxifrage?" You will always be able to remember Fiddleneck. So the next time your guests are thirstily and ever more impatiently waiting for you to think of something worth toasting, raise your glass to the namer of Fiddleneck, whoever it may have been.

Habitat:  Fiddleneck grows only at the lowest elevations in Yosemite proper, but is widespread in the foothills, growing in vast colonies. If you're driving through the hills in the spring and you notice that the scenery has turned yellow, it's likely Amsinckia menziesii that's at the root of things.

Amsinckia menziesii etymology:  Amsinckia is a tribute to German businessman and politician Wilhelm Amsinck (1752 - 1831; you can read his German Wikipedia page or the Google translation of it), a benefactor of the Hamburg Botanic Garden. He was given the honor (genus naming, not benefactoring) by German botanist Johann Georg Christian Lehmann (1792 - 1860).

Menziesii is a tribute to Scottish naturalist Archibald Menzies (1754 - 1842).

This Photo: Along the Table Mountain trail, mid April