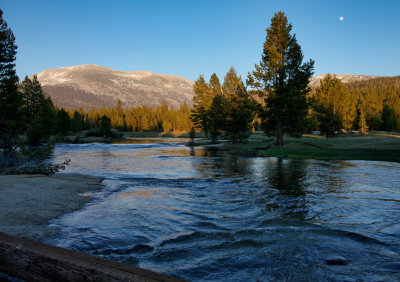 Why hike Lyell Canyon?  Maybe you're a descendant of the eminent English geologist Charles Lyell, who lived long enough to have a canyon named after him and make all those years of looking at rocks worthwhile. Maybe you'd like to mingle with through-hikers on the Pacific Crest Trail, of which the Lyell Canyon trail is a part, and find out whether you really can smell them before you see them. Or maybe you'd just like a pleasant, if unspectacular, hike through the woods, with a few bridges and river crossings (which may sound redundant, but the latter don't always come with the former in Yosemite).

Best Time to Visit:  There's not a definite bad time, as long as the Tioga Road is open (see its historical opening & closing dates), though there may be snow on the trail for the first few weeks after the road opens. The second half of June and the first half of July, roughly when the meadows will be greenest and the rivers at their most watery, may have an edge over other times of year.

Crowd Factor:  It's not too crowded to begin with, but it grows rapidly more secluded once you've crossed the bridges in the first mile and a half of the hike.

Difficulty:  Easy. You can make this a very short hike if you want, the trail is generally smooth, and you'll have to hike for several hours to find much elevation gain. However, the starting elevation of 8,500 feet bumps the difficulty up a notch, so it ranks a 2 out of 10.

Parking:  There's a large lot just west of the trailhead. There's also a large lot at the trailhead, but it's reserved for guests of the Tuolumne Meadows Lodge. See the "Getting There" section below for more details.

Nearest Bathrooms:  At the Tuolumne Meadows Lodge, in the brown building (does this seem disturbingly appropriate to you?) just uphill from the lodge itself.

From Yosemite Valley, it's a 10-mile (16-km) drive up highway 120 to the Tioga Road junction at Crane Flat, and then another 40 miles (64 km) east to the the Lodge turnoff. From Yosemite's eastern entrance at Tioga Pass, it's 7 miles (12 km) west.

Take the turnoff to the Tuolumne Meadows Lodge, which is just east of Tuolume Meadows itself. Once on the lodge road, pull in at the Dog Lake parking lot (there's another lot for Dog Lake on Tioga Road itself, but that's not the one you're after now). From here, hike a few hundred meters farther up the road to the main parking lot for the Tuolumne Meadows Lodge. You'll find the trailhead near the southwest corner of this parking lot. Here's a Google Street View panorama of the parking lot with the trailhead sign visible, although it's a bit blurry, and here's another panorama showing the turnoff to the Lodge road.

Forks in the Trail:  The first fork occurs just a few hundred meters past the trailhead, if you're taking the trailhead from the Tuolumne Meadows Lodge parking lot. The left fork takes a bridge across the Dana Fork of the Tuolumne River, and the right fork continues ahead along its southern bank. Take the left fork and cross the river here. Not only is it more interesting looking, but it's the right trail, too.

Yet another fork awaits you a little over 5 miles (8 km) into the hike. Stay left to continue through Lyell Canyon to Donohue Pass 7 miles (11 km) ahead; turn right to go to Ireland Lake, 4.3 miles (7 km) distant.

Likely Turnaround Points:  The most popular spot on the trail, pictured at the top of the page, is about three-quarters of a mile (1.2 km) from the trailhead. Here a pair of bridges cross a rocky section of the Tuolumne River, with cascades downstream and a meadow upstream. Trails on either side of the river venture into the meadow beside the river.

About a mile and a half from the trailhead, there's another bridge, this one crossing Rafferty Creek. This bridge is surrounded by woods rather than a meadow, but it's still pretty. Two miles in, you'll reach a large meadow with the Lyell Fork of the Tuolumne River flowing across the opposite end. At three miles and for several miles thereafter, once the trail has turned south, you'll find smaller meadows with the Tuolumne flowing through them. Check out the satellite view to scout these and other spots.

Hazards: About a mile and a half into the hike, just after crossing the bridge over Rafferty Creek, there's another creek crossing with no bridge. It's too wide to leap across during peak runoff, but there's a log crossing.

Bringing mosquito repellent is a decision you're not likely to regret. In a not entirely unrelated matter, the meadows along the trail can be marshy early in the summer.

If you take the Lyell Canyon trail all the way to the park's boundary at Donohue Pass, 12 miles (19 km) away, you'll pass just to the north of Mount Lyell and Mount Maclure, where live two of Yosemite's last remaining glaciers. The Yosemite Nature Notes team has shot some spectacular video of the two glaciers, and since they're expected to have melted entirely within a few decades (the glaciers, not the Nature Noters), you'll probably never get as good a view of them as this: