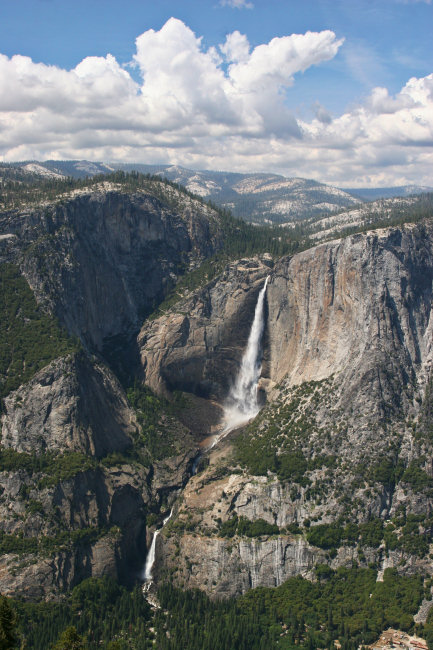 As you near the top of the 4-Mile Trail, the view of the middle cascades gets obscured by rock, but the scale of the view makes it even more spectacular than the view from the lower part of the trail. From here, you can see not just the falls, but miles beyond them to Yosemite's northern country; somewhere in the vicinity of the horizon, the Tioga Road winds its way east towards Tenaya Lake, Tuolumne Meadows, and other of Yosemite's lesser known lights. Even though you're a mile and a half (2.5 km) away from them here, the falls will be plainly audible during the spring runoff.

It's hard to convey the scale of what you're looking at here, but here's a shot: consider the Empire State Building. It was the world's tallest building at its completion, 102 stories and more than 1,200 feet high. Yet it's still just barely more than half the height of Yosemite Falls (2,425 feet); it would reach about to the big bowl of spray at the bottom of the upper fall. If you stacked two Empire State Buildings on top of each other at the base of the falls, then stepped inside - actually, you'd probably get arrested before you could do that. The people who snuck in during the commotion and pressed the button for the 200th floor, though, would emerge from the elevator and find themselves eye to eye with the hikers at the upper falls overlook. King Kong, at 25 feet (7.5 meters) tall, would be less than 1/10 the height of the lower fall alone - he'd be a millimeter or so tall on your computer screen, a tiny black dot with no distinguishable features. Bigfoot and Yeti, at only seven or eight feet tall apiece, would be completely invisible, which is just the way they like it.

Or consider Mt. Rushmore. It's 500 feet high and 400 feet wide. Cary Grant and Eva Marie Saint would have comfortably fit into Thomas Jefferson's nostrils, and a little dandruff crumbling off George Washington's head could readily kill anyone it happened to hit. Half a million tons of rock were blasted off the face of the mountain during the monument's creation, which took 14 years - longer than the reigns of any of the presidents carved into the monument, and nearly as long as it takes to get through the line at the post office when you've parked at a meter. It's the largest sculpture in the world.

Mt. Rushmore, however, is dwarfed by Yosemite Falls. The entire mountain would only reach about 20% of the way up the falls. The heads themselves, at around 60 feet high, could handily shower under the lower falls, which are 300 feet high. If you attached the 60-foot heads to bodies scaled to match, the resulting 600-foot-high granite presidents would only reach about a quarter of the way up the falls. (It's definitely worth scrolling back up to the photo so you can visualize this for a few moments.)