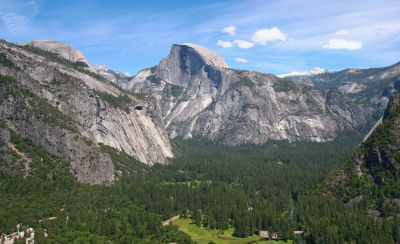 Why hike to Columbia Rock?  Columbia Rock is the free trial version of the Upper Yosemite Falls trail, allowing you to sample the views, dropoffs, and switchbacks without committing to the entire hike. Please note (there's always an asterisk with these free trials) that the actual views included are of Yosemite Valley rather than the falls themselves.

Difficulty:  Medium. It's a short hike, but you pay in switchbacks - more than three dozen of them - for the privilege of the looking-down-on-the-valley views here. It's much steeper than the 4-Mile Trail, which climbs to the valley rim from the opposite side of Yosemite Valley. It's also hotter, since it ascends a south-facing slope, so bring plenty of water if you're hiking it in the summer.

Best Time to Visit:  The views from here are good year round. Since it's the distant views that make this hike, hazy days will hurt this hike more than they will a hike to a lake or waterfall. You'll get the best views of Half Dome near sunset and of the western valley in the morning, but due to the high valley walls, the valley itself will be in shadow early and late in the day.

Crowd Factor:  If you've been reading other reviews, this is a tired refrain, but: hikes starting in Yosemite Valley are usually crowded in the summer. If you can, pick a weekday instead of a weekend or start early in the morning.

Nearest Bathrooms:  At the Lower Yosemite Falls trailhead, which will also be your trailhead for this hike.

Nearest Snacks:  Yosemite Village, half a mile east of the Lower Yosemite Falls trailhead, has Yosemite's largest general store plus a handful of restaurants.

The free shuttle buses stop at the Lower Yosemite Falls trailhead, so if Yosemite Valley isn't pretty enough for you to walk through, you can take a bus directly to the trailhead. In this case, your best bets are Yosemite Valley's two largest lots, the day-use lot at Yosemite Village and the big dirt lot at Curry Village. You can catch the bus from nearby either of these.

The half-mile prelude to the regular trail is flat, and you'll think back on it with longing once you start on the regular trail. The highlight of this stretch is a granite slab that's frequently used for rock-climbing practice.

The turnoff to the official Columbia Rock trail is easy to spot; there's a sign pointing the way to the top of Yosemite Falls. Once you're on the trail, just gird your loins (however you happen to do that) and hammer your way through the long series of switchbacks that open this trail. You'll get a respite from the climbing before you get to Columbia Point, which you'll readily recognize from the iron guardrails that protect you from the view of Half Dome (and possibly from the intervening thousand-foot dropoff as well).

Mosquito repellent, sunblock, and enough liquid to sustain you through a steep hike could all come in handy here. Though the dropoffs aren't world-class sheer (except at Columbia Rock itself, which has guardrails), this trail is probably not for hikers with vertigo or fear of heights.