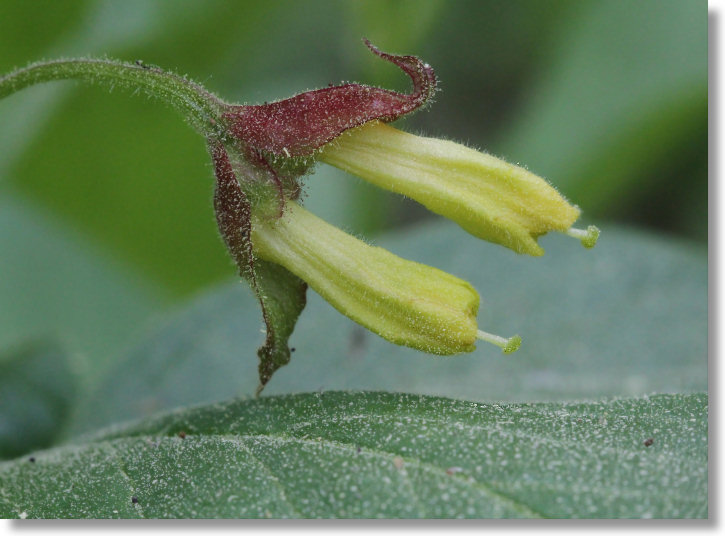 Twinberry Honeysuckle, a shrub that grows in moist and generally shady areas, is known for its small, tubular yellow flowers, which bud in pairs, bloom in pairs, and eventually transmogrify into pairs of black berries. If they have any regrets about sharing space and sunshine with a twin they'll never be free of for a single moment from birth to death, they don't give any indication of it. Possibly they know that things could be worse - the twin flowers of Mountain Twinberry, another honeysuckle, merge into a single berry.

Twinberry Honeysuckle grows all over the western US and Canada, surviving as far north as Alaska. It's reported to be able to reach 10 feet in height, but doesn't come near that size in Yosemite. The flowers are small and not readily spotted unless you have a looking-for-flowers sort of mentality, in which case you might want to practice by seeing if you can find the ten or so pairs visible in the plant photo below.

Lonicera involucrata etymology:  Lonicera is named for Adam Lonicer (1528 - 1586), a German botanist who probably never got to meet this particular member of his genus. Involucrata derives from the Latin verb involvere, meaning "to wrap", and now means "having a wrapper" - in this case, the reddish bracts that envelop the flower during the bud stage. Ancient Latin included a few similar terms that also involved things that wrap or get wrapped, including involucre (smock) and involvolus (caterpillar). Involvere is also the source of the English word involve, probably through the sense invoked by the phrase se involvere, meaning "to get wrapped up in".

This Photo:  Along the McGurk Meadow trail, mid July. A short way into this hike you'll reach a boggy area with a log crossing; Twinberry Honeysuckle grows just to the left of the trail here. I missed it for years because I was too intently focused on keeping my feet dry. Mountain Twinberry, mentioned above, also grows along this trail. 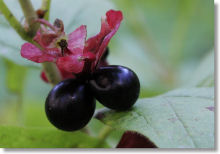