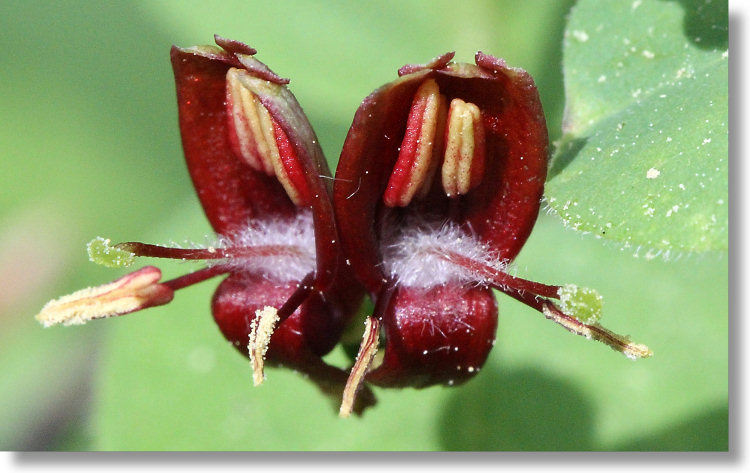 The flowers of Mountain Twinberry are small and easily overlooked; I walked right past them on the McGurk Meadow trail for years before noticing the little maroon blooms mixed in with the shrubbery, and then it took a much closer look to ascertain that they were actually flowers. If you find them on your wanderings in Yosemite, you can be confident that you're the only hiker on the trail that day to have made that discovery. There really should be a prize for this.

Size:  Shrub generally 2 - 4 feet high and spreading equally as wide; flowers small and inconspicuous, typically a centimeter or less in height and width

Lonicera conjugialis etymology:  The Lonicera genus is named for 16th-century German botanist, physician, and math professor Adam Lonicer, a man of such a vast intellect that his hair had to migrate away from all the heat his brain generated. Though he spelled his name three different ways, he only managed to get a genus named after one of them, which goes to show just what an honor this is. Conjugialis is the Latin term for marriage, referring here to the tendency of the flowers to grow in pairs and then merge into a conjoined fruit.

This Photo:  Near the McGurk Meadow trail, mid July. Yosemite's other twinberry honeysuckle, the yellow-flowered Lonicera involucrata, also grows along the McGurk Meadow trail, at a spot not far from the trailhead where the trail passes through a swampy area. Most people miss the flowers because they're busy trying to negotiate the log crossing without getting their feet wet, but the Lonicera grows just off to the left. 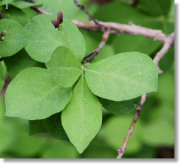 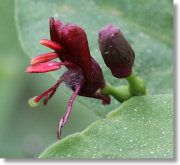 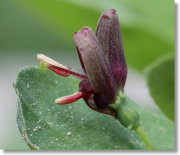