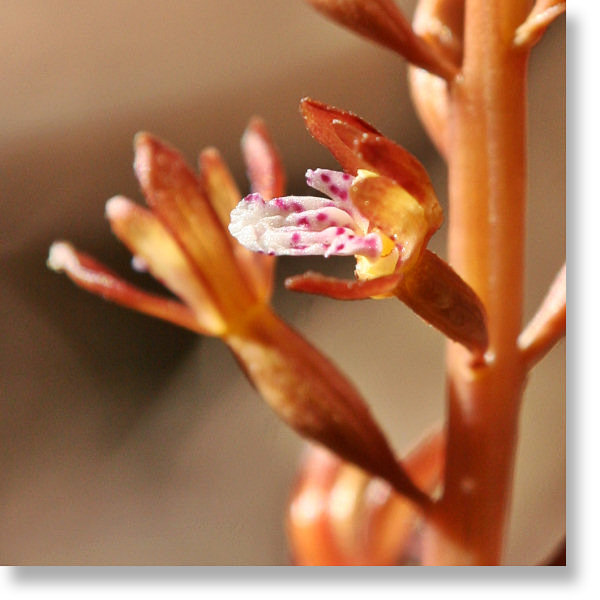 This plant can grow up to two feet tall, but it's slim and leafless, with tiny flowers, so you'll have to be alert to spot it. The flower in the above photo appears much larger than in real life; pack a magnifying glass if you want to get a good look at the flowers in the wild.

Where to find it:  Spotted Coralroot grows in nearly every state in the US, although the ones in Yosemite are, it hardly needs to be said, the happiest. It prefers to live in dry, pine-shaded woods, typically thriving deep in the shadows. I've seen it all over the place on trails departing from the Glacier Point Road, and found it along the Merced Grove trail as well. It's small and doesn't stand out, so spotting it is an acquired knack.

Corallorhiza maculata etymology:  Corallorhiza is Greek for "coral root," used here because the roots resemble coral. Maculata is a Latin term meaning "spotted," and refers to the flowers. This puts Spotted Coralroot, along with its relative, Corallorhiza striata, on the short list of wildflowers for which the scientific and common names mean exactly the same thing.

This photo:  Between Taft Point and Sentinel Dome, late June