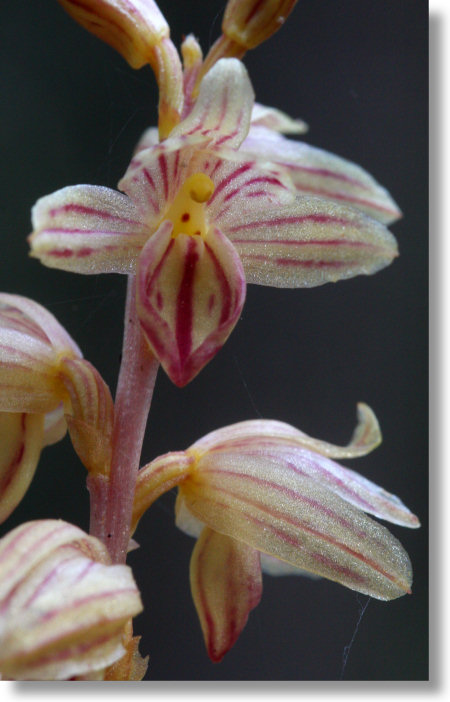 Striped Coralroot grows throughout Canada and the western U.S., but it's not particularly common in Yosemite and not easy to spot in the places it does grow - it's not very large or flamboyant (1 - 2 feet tall with smallish flowers) and usually sticks to locations in deep shade, thick with forest duff, where it's least likely to be observed engaging in its scandalously predatory lifestyle, in which it eschews photosynthesis altogether and survives instead by exploiting helpless, adorable soil fungi.

The yellow spigot protruding from the heart of the flower is a column, a swiss army knife of sexual functionality enclosing all the plant's reproductive bits, both male and female, in a single handy package. All members of the orchid family rely on this arrangement to orchestrate the production of future generations of Orchidaceae.

Striped Coralroot been recorded in a handful of locations in the Yosemite area; I've seen it in Nelder Grove, along the Wawona Meadow trail, and along the western end of the Pohono Trail between Inspiration Point and the valley rim. You're likely to spot - or walk past, at any rate - dozens of the more widespread Spotted Coralroot before you encounter the striped variety.

Corallorhiza striata etymology:  It's probably not worth becoming a fugitive from justice to personally verify this, but the roots of Striped Coralroot are said to resemble coral, and Corallorhiza, accordingly, is a Greek term meaning "coral root". "Striata" means striped, something you can legally verify by discreetly examining the flowers. 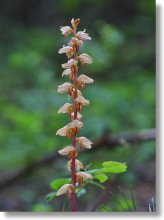