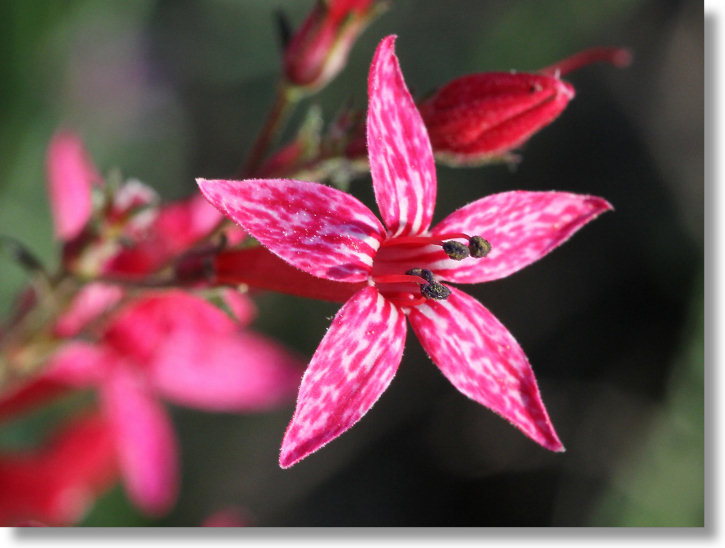 A pair of nearly-alike subspecies of Ipomopsis aggregata in Yosemite are both called Scarlet Gilia: ssps. bridgesii and formosissima. You might be able to tell them apart by their anthers, the little globules at the end of the stamens. If they're blue, like in the photo at the bottom of the page, they could be either bridgesii or formosissima, but if they're not, then you're seeing formosissima. To muddy things a bit further, ssp. formosissima is known in some quarters as ssp. aggregata instead (or vice versa, possibly). If you're not a botanist, just call the lot of them "Scarlet Gilia" and consider it a good day's work, that's my advice.

Scarlet Gilia grows in sunny spots, often in sandy soil, at Yosemite's mid elevations, but seems particularly widespread in the Glacier Point Road area. I've often seen it off the McGurk Meadow Trail and along the Pohono Trail between McGurk Meadow and Sentinel Dome, or just growing along the road itself. The bright flowers are easy enough to spot on their own, but they tend to gather in groups (hence the aggregata in Ipomopsis aggregata), making Scarlet Gilia particularly unmissable.

Ipomopsis aggregata etymology:  Ipomopsis is a Greek term meaning "similar to Ipomoea", with Ipomoea being a genus in the Morning Glory family. Ipomoea itself is another Greek coinage meaning "similar to bindweed", referring to the twining nature of plants in the Ipomoea genus (a quality not shared by Scarlet Gilia). Aggregata is a Latin-derived word that translates roughly to gathered, collected, or joined. [1] [2]

This Photo:  Near the McGurk Meadow trail, early August 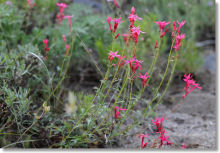 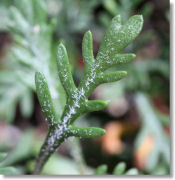 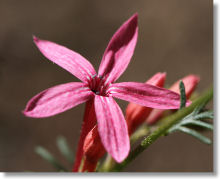