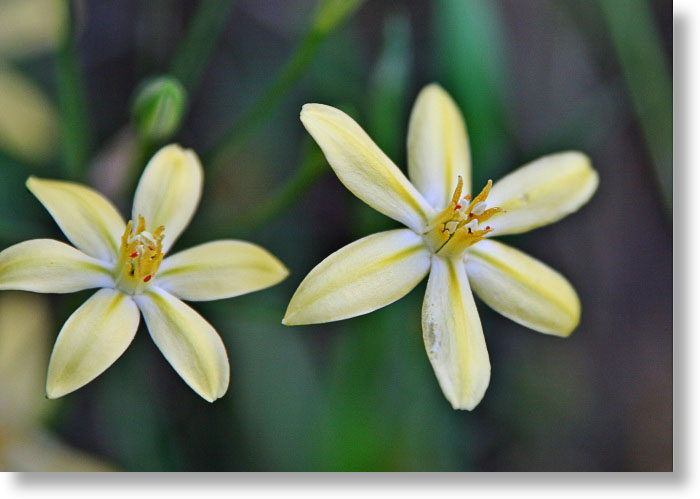 Pretty Face is a common flower in both the foothills and Yosemite. I've seen it along trails at elevations ranging from Hite Cove (1,900 feet) to Olmsted Point (8,300 feet). Two similar-looking subspecies of Pretty Face inhabit the Yosemite area: ssp. scabra, pictured here, and ssp. anilina. One way to tell them apart, should that be the sort of thing you enjoy doing, is to compare the anthers (the tips of the stamens, which are the bits sticking out of the center of the flower). On ssp. scabra they're white, and on ssp. anilina they'll be bluish. Ssp. scabra is also more likely to be found at lower elevations, with ssp. anilina more prevalent at 7,000 feet and above.

The flowers grow at the ends of an umbel (think of an upside-down umbrella) that sprouts from a bare stem, and an umbel may have as many as two dozen buds. Though they seldom all bloom at once, you'll still usually find multiple flowers blooming together.

Triteleia ixioides etymology:  Triteleia comes from the Greek words tri (three) and teleos (perfect), referring to the plant's parts occurring in sets of three (yes, six petals counts as sets of three). Ixioides means "Ixia-like," for the plant's reputed resemblance to Ixia, a genus in the Iris family.

This Photo:  Along the Lewis Creek trail, early June 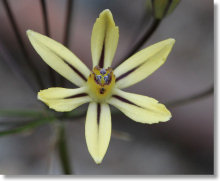