Habitat:  It seems happiest lurking around the edges of meadows. I've seen it in both McGurk and Tuolumne Meadows.

Size:  The plants grow more than three feet high, but they don't stand out because the flowers appear nondescript until you examine them closely. Then you find that, although the monument plant claims to be Yosemite's greenest wildflower, it's actually got large white patches, lots of little dark spots, and a bug-sized gauntlet of bristles on each petal.

Swertia radiata etymology:  Swertia is named for Dutch artist/floriculturist Emanuel Sweert (1552 - 1612), most noted as the author of the Florilegium, an extremely popular catalog of plant illustrations that contributed to the heady days of Tulip Mania. Radiata is from the Latin word radiatus, meaning spoked or having rays. 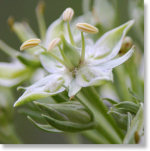