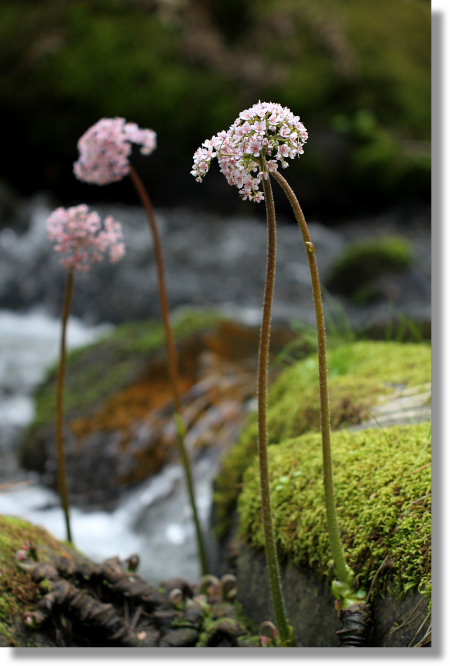 Somewhere along the line Indian Rhubarb noticed that the growing-right-out-of-the-river niche was unaccountably vacant, so it moved in and made itself at home and has clearly found the arrangement satisfactory. It grows in abundance along the Lewis Creek and Carlon Falls trails and has also been reported in and along other streams in the Yosemite area.

The flowers grow in clusters, softball-sized or even larger, of pink or white. The leaves are even more immense, often as big as dinner plates and approaching the size of cymbals on the showiest specimens. The leaves are peltate, meaning that the stem attaches to the center of the leaf. This allows additional water to puddle in the leaf centers, just in case they suck completely dry the rivers they're growing in and begin to feel a bit faint.

The foregoing would be enough to satisfy the ambitions of most wildflowers, but Indian Rhubarb further separates itself from the chaff of the Plantae kingdom by exposing its rhizomes for the benefit of the public. Rhizomes are specialized stems that, in more circumspect species, spread underground, but in the case of Darmera peltata creep tentaclewise all about the place above ground, looking somewhat like pahoehoe lava and periodically sprouting the plant's more conventional vertical stems. (You can see a few rhizomes in the above photo, but here's a better look.)

You can tell how fond botanists are of a species by the language they use to describe it, and the most respected sources spare no ecstasies of poetry when it comes to Indian Rhubarb: "Corymbose cymes!" one of them says unapologetically. "Saucerlike hypanthium!" cries another. "Branches into panicles!" gushes a third. Even the normally unflappable Jepson Guide loses its composure: "Ovary superior!" it proclaims to the heavens, and doesn't care who hears it. This is obviously a plant worth traveling any distance to see.

Darmera peltata Etymology: The Darmera genus is named for 19th-century German botanist Karl Darmer. Peltata derives from pelta, the Latin term for a small leather shield. It's used here because the stem attaches to the center of the leaf, presumably the same place where an arm grips a shield.

This Photo:  Along the Lewis Creek trail, mid May 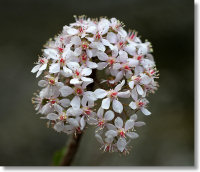 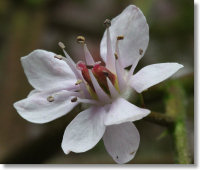