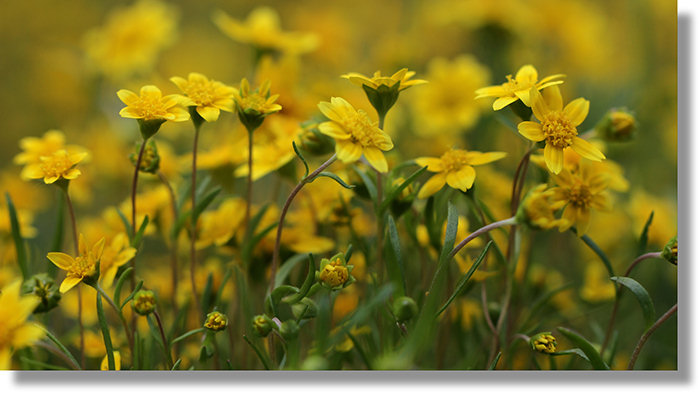 Goldfields flowers are almost indistinguishable from Foothill Sunburst, and to compound the confusion, they grow in the same habitats (you can find both of them along the Hite Cove trail, for instance). If you want to know which one you're looking at, check out the leaves. The alternate leaves of Foothill Sunburst branch and diverge like tributaries of a river, while Goldfields leaves are simple, single-line appendages, oppositely arrayed.

Lasthenia californica etymology:  The Lasthenia genus is named for Lasthenia of Mantinea, a Greek philosopher cited as one of Plato's female students - a rarity in a society where women had little status. Californica refers to the state where the plant is most widely found, though it has also been spotted in Oregon, in Arizona, and in Mexico, which probably doesn't like being referred to as a state.

This Photo:  Along the Hite Cove trail, early March