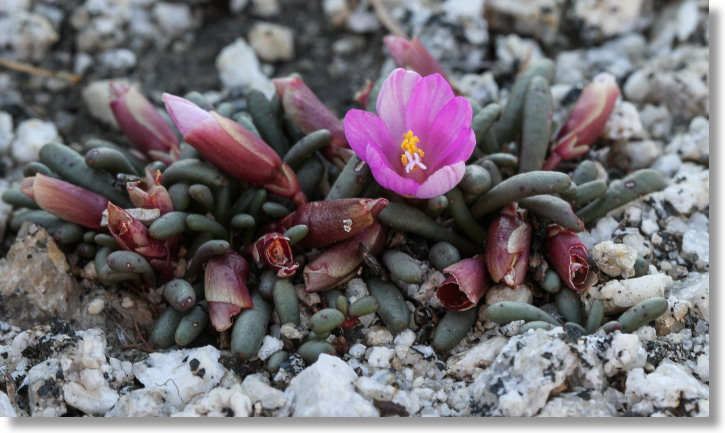 On the trailing edge of winter, when the high country roads are still closed and access is a major undertaking, Yosemite Lewisia blooms in profusion on select granite domes in the snowy Sierra Nevada. A few weeks later, the blooms have faded, the leaves withered, and the seeds dispersed, and by the time the trails open and hikers begin arriving, there's no evidence left that the plants were ever there at all. Not many people are willing to hike, snowshoe, and slog for miles into the mountains in hopes that they've guessed right about the bloom period of this most uncooperative flower, which would seem destined to remain unseen by the world's wildflower enthusiasts.

Yosemite, however, has a Lewisia disepala cheat code: Turtleback Dome. A relatively low elevation granite dome with a trailhead a couple miles up the road from the Tunnel View and a peak altitude of a little over 5,000 feet, Turtleback is accessible nearly all year via a simple half-mile walk and has its own small population of Yosemite Lewisia. This is the botanical equivalent of being able to ride a gondola to the top of Half Dome or Gandalf being clever enough to just ask the eagles to drop the ring into Mt. Doom in the first place and avoid all that troublesome being nice to people so they'll form fellowships with you. Goodbye, hyperborean expedition with its accompanying frostbite and search parties, and hello, ten-minute hike while munching on an eskimo bar from Yosemite Village.

Yosemite Lewisia isn't just generally tricky to see in bloom, by the way; it's also in the CNPS inventory of rare and endangered plants, with a "rare, threatened, or endangered in California and elsewhere" 1B.2 ranking. It's endemic to California and grows only in a narrow band of the southern Sierra Nevada (see the sad paucity of pushpins on the CalFlora distribution map). CNPS itself reports a mere 22 known sites. For wildflower aficianados, these flowers are better than Bigfoot.

Great responsibilies etc. dept.:  Should you climb Turtleback Dome to see the flowers, which typically bloom there in February or March, please be careful not to damage any of these rare plants. Start by watching your step. The lewisia grows in gravel-strewn spots below the summit, so try to walk on solid granite areas when you're exploring. If you find a flower and kneel to look at it, look around first to make sure you won't be disturbing any nearby specimens (or the one you're looking at, for that matter). And don't pick or remove any flowers or bits of the plant, which is not only bad form, but illegal.

Lewisia disepala etymology:  Lewisia is named for Meriwether Lewis (1774 - 1809), co-headliner of the Lewis & Clark expedition, who discovered the genus while wandering through what would eventually become Montana. Disepala means "having two sepals". (Sepals are specialized leaves that enfold and protect the flower during the bud stage - gift wrap for flowers, basically. Some species, such as Western Rue Anemone, don't have petals, and what appear to be petals are actually the sepals. You can see several maroonish sepals in the above photo.) 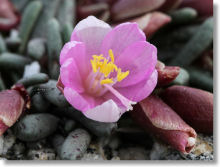