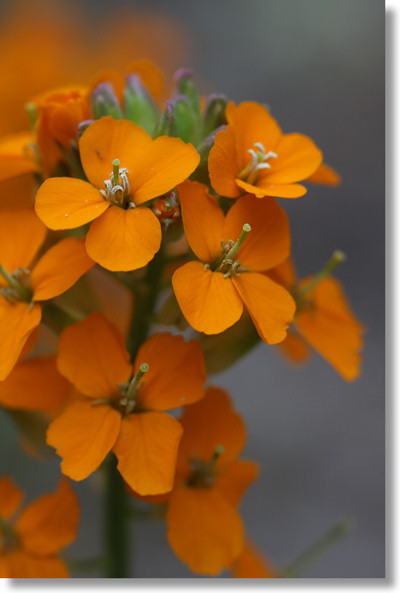 If identifying flowers while you hike has lost its challenge and you've taken instead to doing it while you drive, you should hope you've got Erysimum capitatum on your wildflower bingo card. Its flowers are only average sized, but they cluster together into bright orange, baseball-sized heads that you can spot from the car at 35 mph, at 45, and possibly beyond (I refer here to you, not the flowers, achieving these velocities). They're also widespread throughout the park, though at higher elevations the orange subspecies, Erysimum capitatum ssp. capitatum, fades away and gets replaced by the yellow subspecies, Erysimum capitatum ssp. perenne. In all of Yosemite, Western Wallflower may be exceeded only by Mountain Dogwood and Western Azalea in the flowers-easy-to-identify-at-high-speeds category.

Erysimum capitatum etymology:  Erysimum derives from the Greek word eryomai, meaning "to help or save," and refers to the reputed medicinal qualities of some members of the genus. Capitatum, a botanizectomy of the Latin word for head, capitalis, is a nod to the cluster of flowers that form a globe at the top of the stalk.

This Photo:  Along Highway 41 near Chinquapin (the Glacier Point Road turnoff), late May