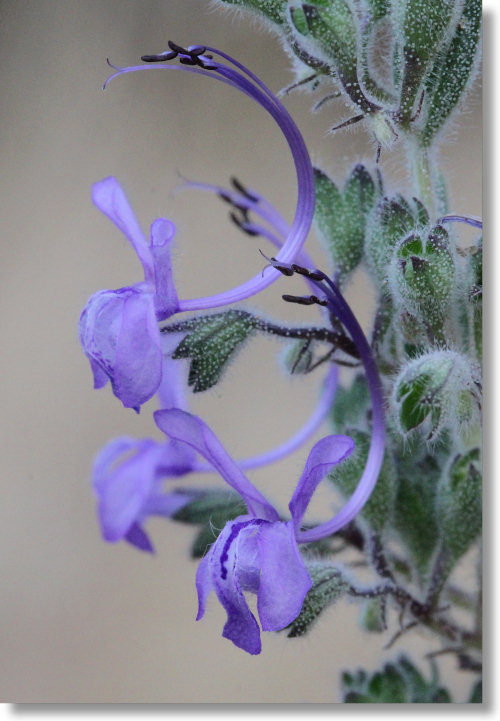 Vinegarweed is primarily a foothill flower, rarely found in Yosemite but growing in large numbers in open, dry areas at lower elevations. You should be able to find thousands of the tiny purple blooms in the Ahwahnee Hills Regional Park (along Highway 49 between Oakhurst and Mariposa) in September or thereabouts. Its late-season blooming period provides a handy distraction for bees, who would otherwise be hard put to resist the siren calls of gambling and night clubs.

The flowers are quite small and the blueish-green plants aren't immediately eye-catching, but the flowers are actually rather striking, with bunny-ear petals and long, curving pistils & stamens that curl around like a scorpion's tail.1 Vinegarweed provides an excellent opportunity to establish your flower-nerd cred, since you'll have to get down on the ground and use a macro lens or magnifying glass to fully appreciate this plant's beauty - or possibly to notice it at all.

While the specimen featured in the plant photo below is a magnificent tumbleweed-sized über-plant that probably spends its spare time flexing and posing for pinup calendars, the Vinegarweeds you encounter in the wild are equally likely to have just a handful of stems and be only a foot or so tall.

Trichostema lanceolatum etymology:  Trichostema means "hairy stamens". On Vinegar Weed, the stamens are just about the only part of the plant that aren't hairy (though I haven't examined the roots), but that's the genus it's in anyway. Lanceolatum means lance-shaped, and if it's referring to the leaves, this bit at least is an excellent call.

This Photo:  In the Ahwahnee Hills Regional Park, late September

1 Question for further study: if bunny-scorpion hybrids existed, would humans still be the planet's dominant species? Would it matter whether they were bunny-sized or scorpion-sized? Explain. 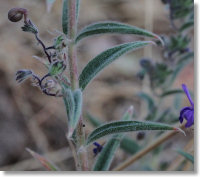