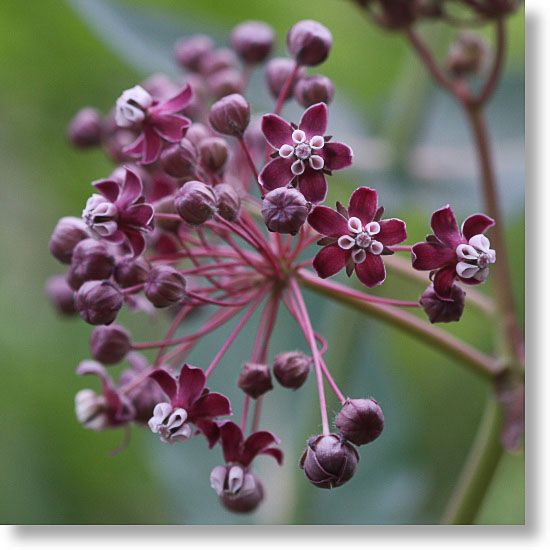 Milkweeds get their name from the milky sap that will pour out of their stems should you split one open (which you shouldn't). If you're on a nature walk with one of Yosemite's interpretive rangers and you pass by a stand of milkweed, have a heart and stop so he can avert spontaneous pent-up-knowledge combustion by explaining the symbiosis between milkweed and Monarch butterflies: milkweeds serve as nurseries for the Monarch caterpillars, and even after they've transmogrified into butterflies, the alkaloids they ingested from the milkweed will make them as palatable to predators as canned brussels sprouts or Henry James.

Purple Milkweed doesn't reach Yosemite's highest elevations, but you can still find it in many parts of the park. I've seen it in the Hetch Hetchy area along the Wapama and Rancheria Falls trails, along the Crane Flat Road, in southern Yosemite in the Chilnualna Falls area, and in lots of places in the foothills.

Asclepias cordifolia etymology:  Asclepias refers to Asclepius, the Greek god of healing and medicine. This is ostensibly due to the folk-medicine remedies that various milkweeds have been used for. On the other hand, some species of milkweed are poisonous, so maybe it's a nod to the violence that marked either end of Asclepius's story: he was cut from his mother's womb as she lay dead on a funeral pyre, killed and shortly thereafter burned for being unfaithful to her husband; and he was eventually killed himself by a vengeful thunderbolt from Zeus, who you should never offend if only one of your parents was immortal.

This Photo:  Above the Fresno River near Oakhurst, late May