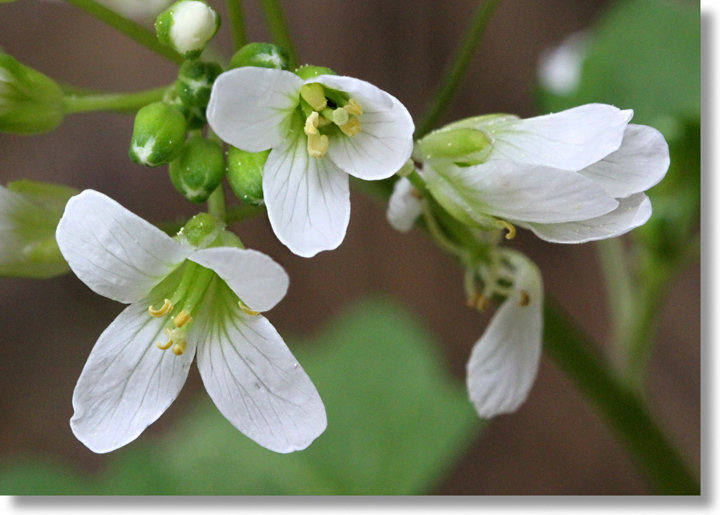 California Milk Maids are one of the first bloomers in Yosemite, which allows them to monopolize the attention of whatever extra-hardy bugs are around during those nebulous days on the cusp of winter and spring. Of course, like many prodigies and pioneers, their story is a tragic one, for they burn out and die early, too. This is why California Milk Maids are known as the James Dean of wildflowers.

Actually, they're not. But they could be, and we can make it happen. Anyone is allowed to edit Wikipedia, you know.

Though the species is reputed to reach two feet high, the plants I've seen have all been much shorter. The flowers are quite small, too, generally dime-sized in diameter. The plant grows in shady, moist areas from the foothills up to 5,000 feet or so. I've seen it along the Wawona Meadow and Lewis Creek trails.

Cardamine californica etymology:  Cardamine comes from the Greek word describing plants in the cress (mustard) family. Californica refers to the state; the leading theory for the origins of the word California itself is that it was named after an imaginary island in Las Sergas de Esplandián, a 16th-century romance adventure novel by Spanish writer Garci Rodríguez de Montalvo. Here's how he describes California (per Wikipedia): [1]

Know that on the right hand from the Indies exists an island called California very close to a side of the Earthly Paradise; and it was populated by black women, without any man existing there, because they lived in the way of the Amazons. They had beautiful and robust bodies, and were brave and very strong. Their island was the strongest of the World, with its cliffs and rocky shores. Their weapons were golden and so were the harnesses of the wild beasts that they were accustomed to domesticate and ride, because there was no other metal in the island than gold.

It's both astonishing and bittersweet that Rodríguez de Montalvo, who invented California on a whim, worked on the research-by-sangria principle, and was writing less than twenty years after Columbus had discovered - well, no one was sure quite what he'd discovered yet - was nonetheless more accurate than the assembly instructions for my office chair. He was probably so good because he didn't have to sit on the ground while he wrote.

This Photo:  Along the Wawona Meadow trail, mid May 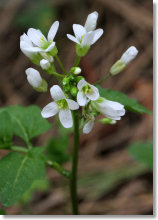