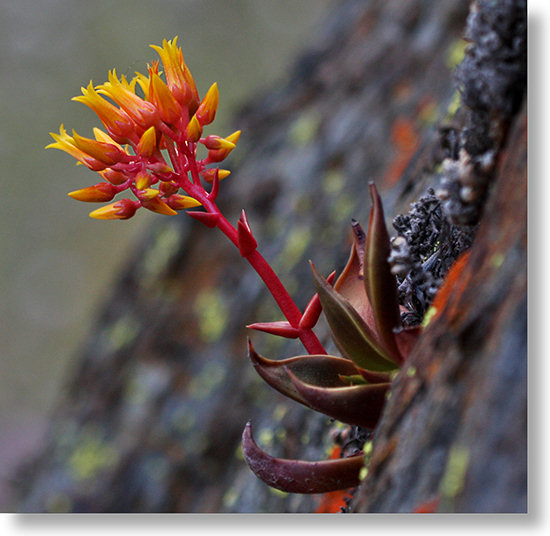 If there's any plant that commands the respect and admiration of rock climbers, it's Live Forever. It hangs out in the same rocky heights and crevices that climbers seek, finding purchase in cracks that appear to hold no soil at all, but does things that climbers can only dream of: it's the ultimate free climber, scoffing at safety equipment of any kind; it's got beyond-zen patience, spending years exploring a single hold; and the capper: in places where climbers would be using all their skill and concentration just to survive, Live Forever has the cool and savoir faire to breed and reproduce. Go ahead and ask your favorite rock climber if he'd mind being reincarnated as Live Forever.

Dudleya cymosa etymology:  The Dudleya genus is named for William Russel Dudley (1849 - 1911), a botanist who taught at Cornell and Stanford.[1] Cymosa is used to describe plants with cymes, flower clusters that bloom from the center out (i.e., the central flowers bloom before the outer ones do).[2] Cyme derives from the Latin term for a young cabbage sprout.[3]