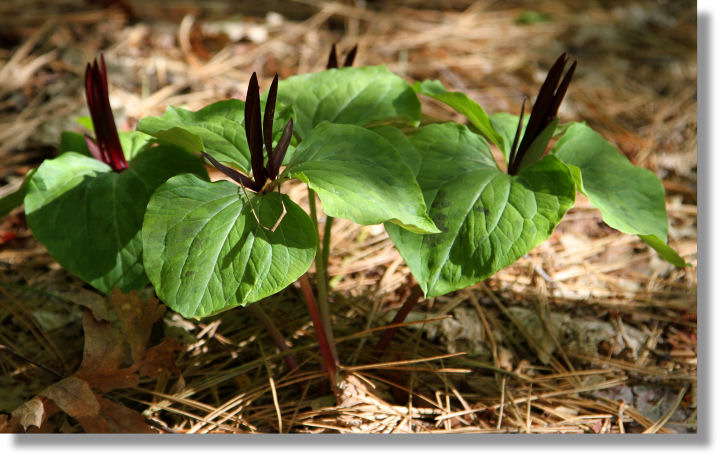 Narrow-Petaled Trillium should be easy to recognize when it's in bloom, particularly since it's the only trillium that grows in Yosemite. The petals are a dark shade of purplish maroon that's otherwise unknown to nature, and unlike nearly every other flower found in the park, they point up into the sky, possibly toward their home planet. The leaves are big and showy and generally mottled to some degree. You'll never mistake Trillium angustipetalum for a lupine or a marmot.

Narrow-Petaled Trillium is endemic to California, growing in the High Sierra along much of its latitude and in some areas along the coast as well. It's only established in a handful of sites in Yosemite, though; I've seen it along the Wawona Meadow trail, usually in small colonies, and near the Ahwahnee Hotel.

Trillium angustipetalum etymology:  These are both Latin-derived terms, the first meaning "three", referring to the number of leaves, and the second meaning "narrow-petaled".

This Photo:  In Yosemite Valley near the Ahwahnee Hotel, mid May