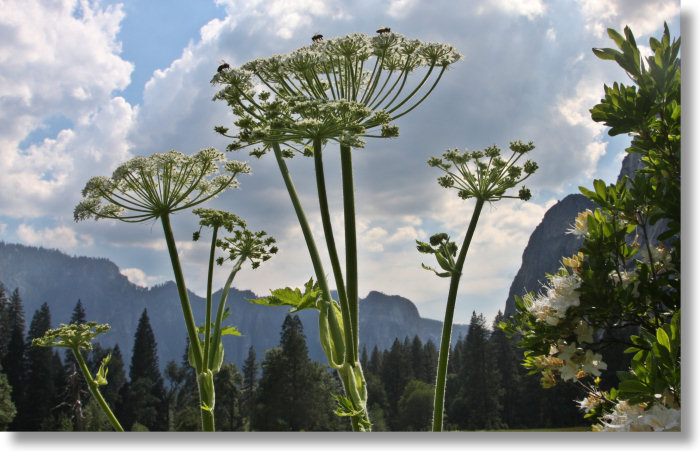 Yosemite is full of plants that sprout clusters of little white flowers. If the one you're looking at is eight feet tall and looks like it came from another galaxy, though, or the bees alighting and taking off from it a few feet overhead remind you of ships at a spaceport, then you've found Cow Parsnip. It's one of the biggest members of the carrot family, and half again as large as any other in Yosemite. Though typically three to six feet high, I've seen it reach as much as eight feet in Wawona Meadow, and it's reputed to reach three meters (9 feet). The flower clusters can be a foot across, and the leaves are nearly as large.

A few other Cow Parsnippets: out of 60 varieties of the Heracleum genus (including the notorious Giant Hogweed, famed in song and legend), Cow Parsnip is the only one native to North America. Its juices can cause skin rash, and eating it will spoil your milk.1 It likes moist areas, typically in meadows or near streams. It grows in vast numbers in the east end of Cook's Meadow.

Heracleum lanatum etymology:  A rough translation from the Latin would be "woolly Hercules", referring to its hairy stems and its size, respectively. 1 2

1 Don't worry so much about this one if you're not a cow. You still shouldn't eat it, though. 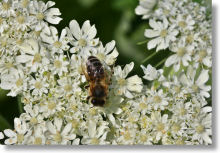 Posing with Half Dome