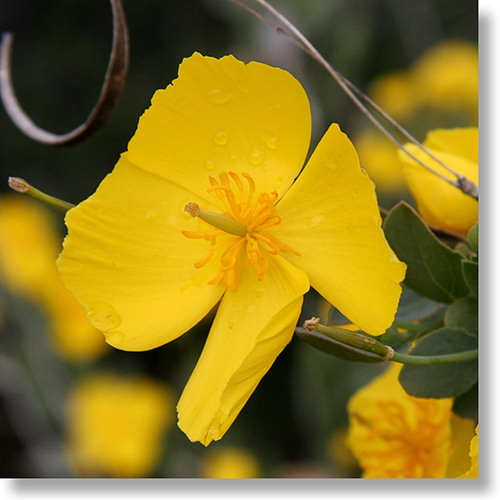 Bush Poppy is a flowering shrub that grows over a wide area of the foothills west of Yosemite but rarely inside the park itself. If you're driving to Yosemite, you might spot it just north of Oakhurst along Highway 41 and along Highway 140 as you descend from Midpines into the Merced River canyon. The flowers can be large - as big as the flowers of its better known cousin, the California poppy - and a mature bush can produce dozens of blooms at once, creating an eye-popping display. Look for it on dry, rocky hillsides. For even more success, look for it on dry, rocky hillsides that have big clumps of yellow flowers sticking up out of them.

This Photo:  Along highway 41 north of Oakhurst, mid April