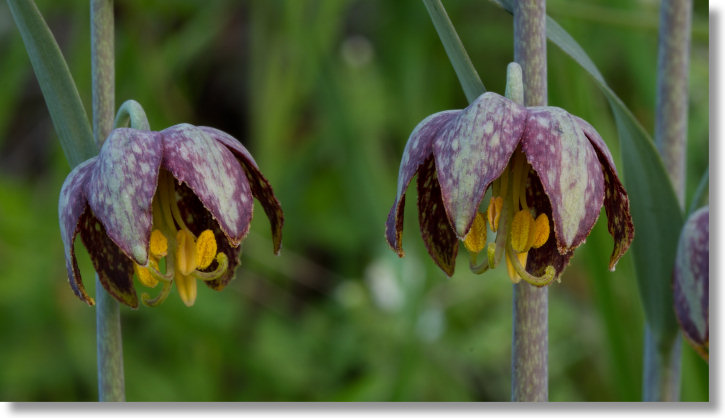 Brown Bells isn't common in Yosemite, and to compound matters, has smallish flowers that don't stand out much from their surroundings. So if you're able to spot one - the north side of the Wawona Meadow trail is a good place to look - hold your head high and consider yourself an honorary pollinating insect, with all the ensuing privileges.

Brown Bells grows only in California, and primarily just in a narrow band of the Sierra foothills and mountains (see the Calflora distribution map). So if you're considering going somewhere other than Yosemite for your vacation this year, add Fritillaria micrantha to the list containing Half Dome, El Capitan, and all the other wonders you'll be missing. Suck that, Maui!

Fritillaria micrantha etymology:  Fritillaria derives from fritillus, the Latin word for a dice box, which, according to the Jepson Flora Project, is what the fruit resembles. Micrantha means "small-flowered"; it derives from the Greek words mikros (small) and antho (flower).