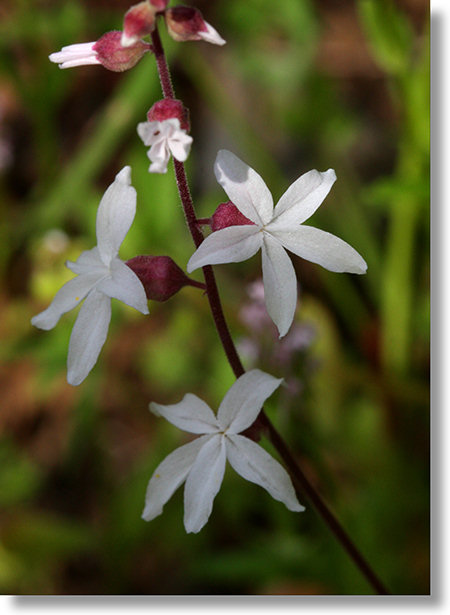 Bolander's Woodland Star grows throughout the foothills and Yosemite's lower elevations, typically in areas with at least partial shade. The Hite Cove and Wawona Meadow trails are good places to find it. The flowers are small - roughly dime-sized - and easily overlooked by non-pollinators, a club of which you are probably a member. This plant is endemic to California, a point worth considering if you were thinking of spending your vacation in some other state this year.

Lithophragma bolanderi etymology:  Lithophragma is an amalgamation of Greek words meaning "stone hedge" or "stone fence," referring to the plant's habitat. It's also an anagram for "Pig Hath Glamor." Bolanderi honors botanist Henry Nicholas Bolander (1831 - 1897), whose name graces a variety of plants that grow in the Yosemite area. [1]

This Photo:  Along the Hite Cove trail, late March