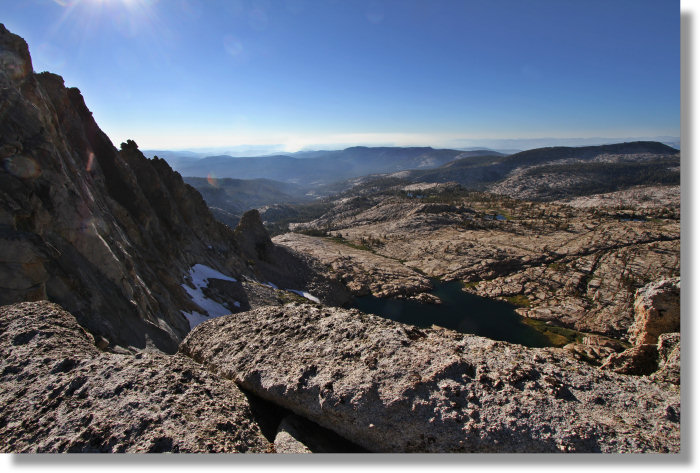 Facing Northwest from the Top of Mount Hoffmann

Mt. Hoffmann's location north of Tioga Road seems like the far edge of Yosemite, but it's actually close to being the park's geographic center; few people ever see the nearly roadless northern half of Yosemite. This view, facing northwest, is wilderness as far as the eye can see. Except for the sky, which is unclassified. And the sun, too, even though it is also known to be roadless.

Directly in front of you, if you're courageous enough to peek over the extraordinarily sheer dropoff here, is the birthplace of Yosemite Falls. The small, snowmelt-fed lakes here coalesce into Yosemite Creek, which takes a leisurely path through the high country until, in what must come as a shock, it arrives at the brink of the park's legendary 2,425-foot cascade. Most of it plunges dutifully over the rim, but a significant minority manifests its displeasure with the current leadership's direction by abandoning the creek to form a coalition of mist, and by late summer, when the word has filtered back up to the headwaters, the creek will usually refuse to flow at all. Any Californian can tell you what a quagmire water politics always turns out to be.