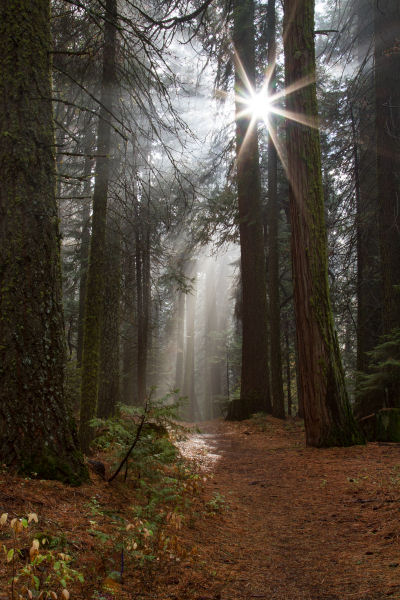 The sequoias get all the glory in Nelder Grove, but various other trees are also here doing their jobs of strewing the trails with pine needles to make the going soft underfoot and dappling the sunlight to keep the UV rays away. Good going, other trees.

In case you'd like to be able to identify some of these other trees, here's a brief guide to the easiest ones:

* If a tree has pine needles and puzzle-piece-like bark, it should be a Ponderosa Pine (Pinus ponderosa) or Jeffrey Pine (Pinus jeffreyi). If the bark smells like vanilla or butterscotch, it's a Jeffrey Pine. The Jeffrey Pine's remarkable aroma doesn't carry far, and to detect it you'll have to shove your nose into the bark in a manner that observers who lack your spirit of scientific inquiry might consider undignified.

* If enormous pine cones are dangling from the branches, it's a Sugar Pine (Pinus lambertiana).

* If it's an evergreen with delicate, fern-like leaves, you've likely found an Incense Cedar (Calocedrus decurrens). Giant Sequoia leaves are similar, but Incense Cedar leaves are more prone to spreading out in a single plane, sort of like fingers on a hand.