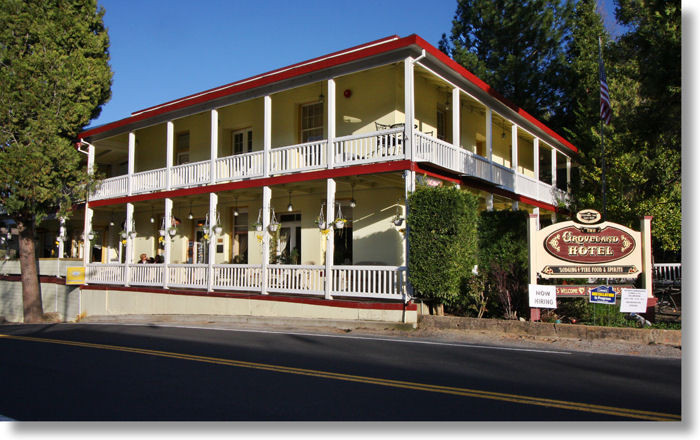 The Groveland Hotel dates to 1849, when George Reid built the original adobe structure (pictured above) to serve fortune seekers lured to the Sierras by the discovery of gold in California. A second building, this one a Queen Anne Victorian, was added in 1914 to house San Francisco officials overseeing the construction of the dam at Hetch Hetchy. The original building is the Sierras' only example of Monterey Colonial Architecture, a style marked by adobe walls and metal roofs. Both buildings are on the National Register of Historic Places, and the original building is also a California Cultural Landmark.

As might be expected with a 150-year-old, the hotel has experienced a variety of fortunes between its gold rush heyday and current rebirth. After construction at Hetch Hetchy was complete, it served as a residential hotel for half a century. Boise Cascade occupied the hotel in the 1960's and used it as offices during construction of the development at Pine Mountain Lake. The Forest Service had offices here through the early 1970's, after which it stood vacant for more than a decade, undergoing an aborted restoration and suffering from neglect and vandalism. The current owners, Grover and Peggy Mosley, bought the hotel out of foreclosure in 1990 and spent a year restoring it before reopening it to the public.

The restored hotel contains 17 individually decorated guest rooms and an award-winning (specifically, the Wine Spectator's award for excellence) restaurant. The guest rooms are named for local persons of interest, primarily women of the Sierras - Lola Montez and Sierra Nevada Vade, to name two, and Lily Langtry, to name another who's really more a woman of the coastal-range foothills - but there are some exceptions, most notably the Lyle room, named for a miner who lived here during the hotel's residential hotel phase, died in 1927 in the room that bears his name, and is reputed to haunt the hotel whenever it is that ghosts get restless - during boo moons, perhaps. He's also reputed to have been the lover of Charlotte DeFerrari, who founded the Hotel Charlotte just down the street.

The guest rooms tend toward the feminine, with teddy bears lounging on the beds, but if this is an affront to your masculinity, just consider them tributes to Elvis, who went to high school with owner Peggy Mosley. If the King sang about them, surely it could only help cement your credentials as a hunk of burnin' love to share a room with them. The rooms also come with featherbeds, plush bathrobes, down comforters, and coffee grinder/brewers. Three of the rooms are suites with fireplaces and spa tubs.