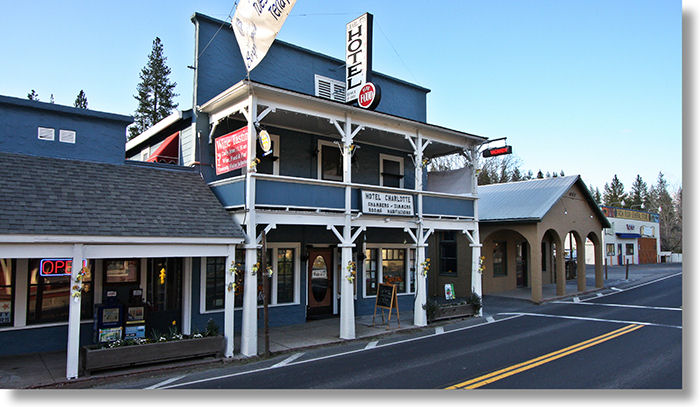 The Hotel Charlotte was built in 1921 by Charlotte DeFerrari, an Italian native who immigrated to California with her family when she was 16. Her father died in a mining accident soon after their arrival, and DeFerrari began working to help keep the family together. She started by cooking meals for work camps and ranch hands, eventually opened her own restaurant, and ultimately built the hotel that bears her name.

The hotel, built in an era with less enlightened attitudes towards women in business - American women had only obtained the right to vote the previous year - is now on the National Register of Historic Places. It contains fourteen individually decorated guest rooms, all with private baths, and includes a restaurant on the main floor.

The rooms are smaller than you'll find in a modern chain motel, predating as they do America's big-mac & supersize-me period, but should still comfortably fit two people. Most of the rooms contain queen beds, but a few contain two twin beds apiece, one contains a king bed, one contains two queen beds, and one contains a queen bed plus a queen futon couch.